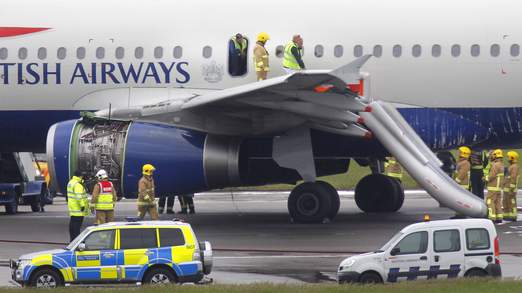 A British Airways plane was forced to make an emergency landing at Heathrow Airport Friday as eyewitnesses reported seeing the aircraft “on fire” flying over central London.

A man who only gave his first name as Jamie told Sky News: “As you looked up you could just see the flames being chucked out of the engine…it was on full fire when we saw it.” There have been 186 flight cancellations in total and BA has cancelled all short-haul flights in and out of the West London airport until 4 p.m. local time.

Passengers are experiencing delays of up to 40 minutes with departures and 25 minutes with arrivals. Both runways were initially closed as the London Fire Brigade confirmed that they had attended to an “aircraft fire,” but they have since reopened.

The disruption comes at the start of one of the year’s busiest travel periods as people head abroad for the Bank Holiday weekend.

For the complete story by Sky News, click here.