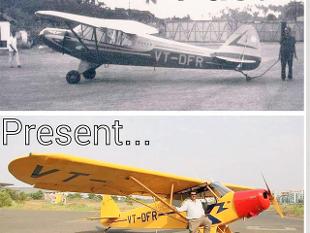 Delta Foxtrot Romeo is no ordinary airplane as it carries not only the legacy of legendary J.R.D. Tata, an Indian businessman and the subcontinent’s first licensed pilot, but also has the distinction of being India’s oldest flyable aircraft.

Claimed to be the “oldest flyable aircraft” not only in India but but all of Asia, VT-DFR, as the call sign of the Piper Super Cub PA 18 says, was imported in the late 1940s and had joined the fleet of The Bombay Flying Club (BFC) in 1951 after registration.

Still owned by the BFC, the oldest flying school in the country, VT-DFR’s legacy includes being flown by the iconic JRD Tata, who was also the first commercial pilot of India, besides serving as a training aircraft to hundreds of aviators who went on to serve various airlines and flying academies.

For the complete story by PTI (Press Trust of India), click here.

Graphic via The Economic Times (India)