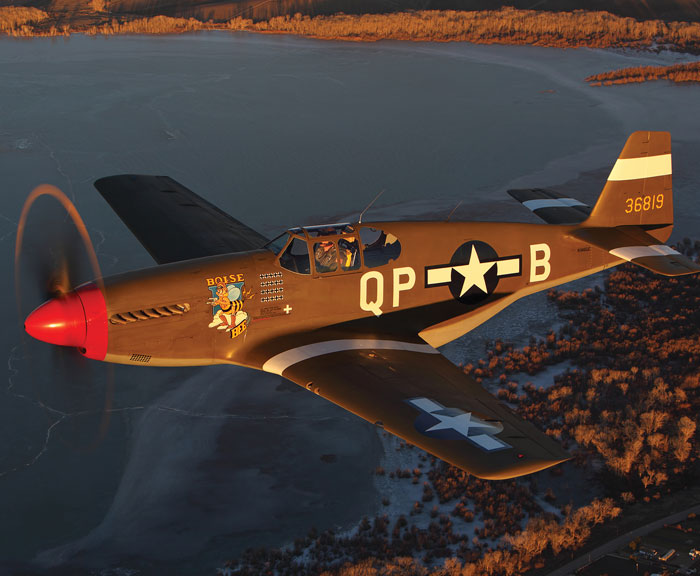 A super-scarce razorback P-51C Mustang now flies over Idaho in markings commemorating Boise ace Duane Beeson and his Boise Bee of World War II. The Mustang has been on the to-do list for John Paul since he acquired it from aircraft collector and dealer Jack Hardwick in 1978. John, along with his wife Sue and son John-Curtiss, are the life force behind the non-profit Warhawk Air Museum on the airport in Nampa, Idaho.
John began stashing items for the Mustang years ago, but serious restoration had to wait until the museum’s maintenance facility was finished in 2007. Since then, the razorback has had life put back into it with the installation of a Merlin engine from a Canadair North Star, Hamilton-Standard propeller form a vocational school, and parts from many sources.
John Maloney from Planes of Fame in Chino, California, helped with the restoration and conducted the first shakedown flight of the newly incarnated Boise Bee on September 29, 2010. The airplane is a star attraction in the Warhawk Air Museum.
Duane Beeson succumbed to a brain tumor in 1947. His family has given Beeson’s memorabilia to the Warhawk Air Museum to display alongside the P-51. The museum’s Mustang is a P-51C, serial 43-25057. In appearance, it represents the similar P-51B (43-6819) flown by Beeson when he was in the Eighth Air Force’s storied 4th Fighter Group in 1944, before being shot down in April of that year.
The Warhawk Air Museum went to great lengths to paint the razorback Mustang realistically, including dulling the sheen of the paint to more closely match the appearance of a genuine wartime P-51 instead of a modern-day salon show piece. To honor local ace Duane Beeson, one liberty was taken. Beeson first flew a P-47 with a bee logo and the name Boise Bee painted on. His Mustang had the Bee, but not the lettering, which the museum added as a composite tribute to the Boise native.
The Warhawk Air Museum (warhawkairmuseum.org) is just off Interstate 84 at the Nampa, Idaho, airport. With slight changes between winter and summer hours of operation, visitors may want to check online before planning a trip to this remarkable Northwest warbird collection.
—Frederick A. Johnsen