On 8 August 1934, the U.S. Army Air Corps entered a proposal for a multi-engine bomber to replace the Martin B-10. Looking for a bomber capable of reinforcing the air forces in Hawaii, Panama, and Alaska, the USAAF’s requirements stated that it needed to carry a useful bomb load at an altitude of 10,000 feet for ten hours with a top speed of at least 200 mph. They also desired, a range of 2,000 miles and a speed of 250 mph. Decided by a “fly-off” at Wright Field in Dayton, Ohio, the competition for the contract was between Boeing’s design, the Douglas DB-1, and the Martin Model 146.

Boeing’s prototype B-17, with the factory designation of Model 299, was designed by a team of engineers led by E. Gifford Emery and Edward Curtis Wells, and was built a the company’s own expense. It combined features of the company’s experimental XB-15 bomber and 247 transport. Its armament consisted of five .30 caliber machine guns, with a payload of up to 4,800 lb of bombs on two racks in the bomb bay. The aircraft was powered by four Pratt & Whitney R-1690 Hornet radial engines, each producing 750 hp at 7,000 ft. 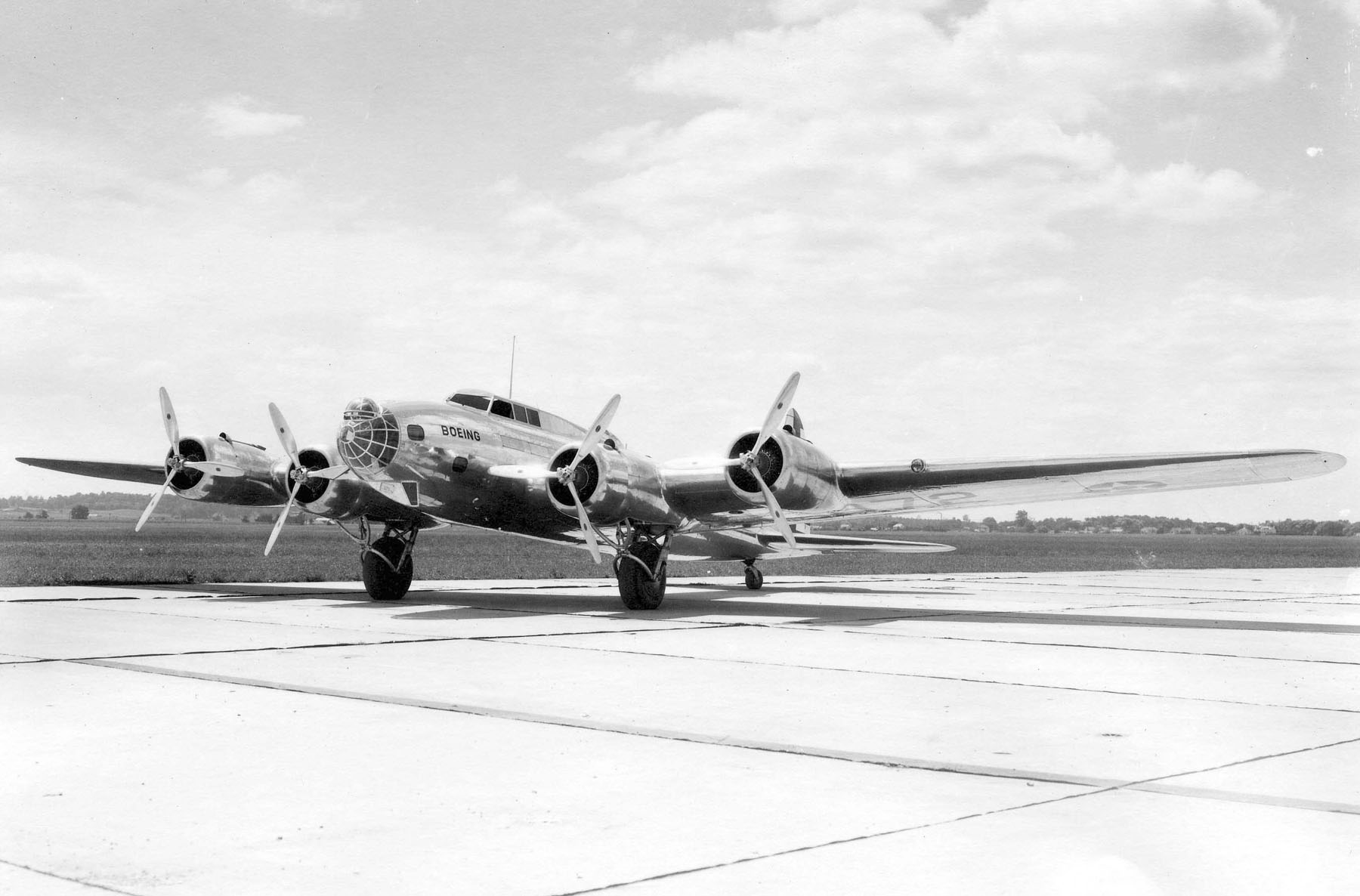 The Model 299’s first flight was on 28 July 1935 with Boeing chief test pilot Leslie Tower at the controls. Richard Williams, a reporter for the Seattle Times, coined the name “Flying Fortress” with his comment, “Why, it’s a flying fortress!” when the Model 299 was rolled out bristling with multiple machine guns.  Boeing quickly saw the commercial value of the name and had it trademarked. Boeing also claimed in some of the early press releases that Model 299 was the first combat aircraft that could continue its mission if one of its four engines failed. On 20 August 1935, the prototype flew from Seattle to Wright Field in nine hours and three minutes at an average cruising speed of 252 miles per hour, much faster than the competition.

Development continued on the Boeing Model 299, and on 30 October 1935, Army Air Corps test-pilot Major Ployer Peter Hill, and Boeing employee Les Tower took the Model 299 on a second evaluation flight. The crew had forgotten to release the “gust locks” devices that held the bomber’s movable control surfaces in place while the aircraft was parked on the ground. After takeoff, the aircraft entered a steep climb, stalled and crashed killing Hill and Tower (other observers survived with injuries. With the crash of the Model 299 Boeing could not finish the evaluation and was officially disqualified from the competition. 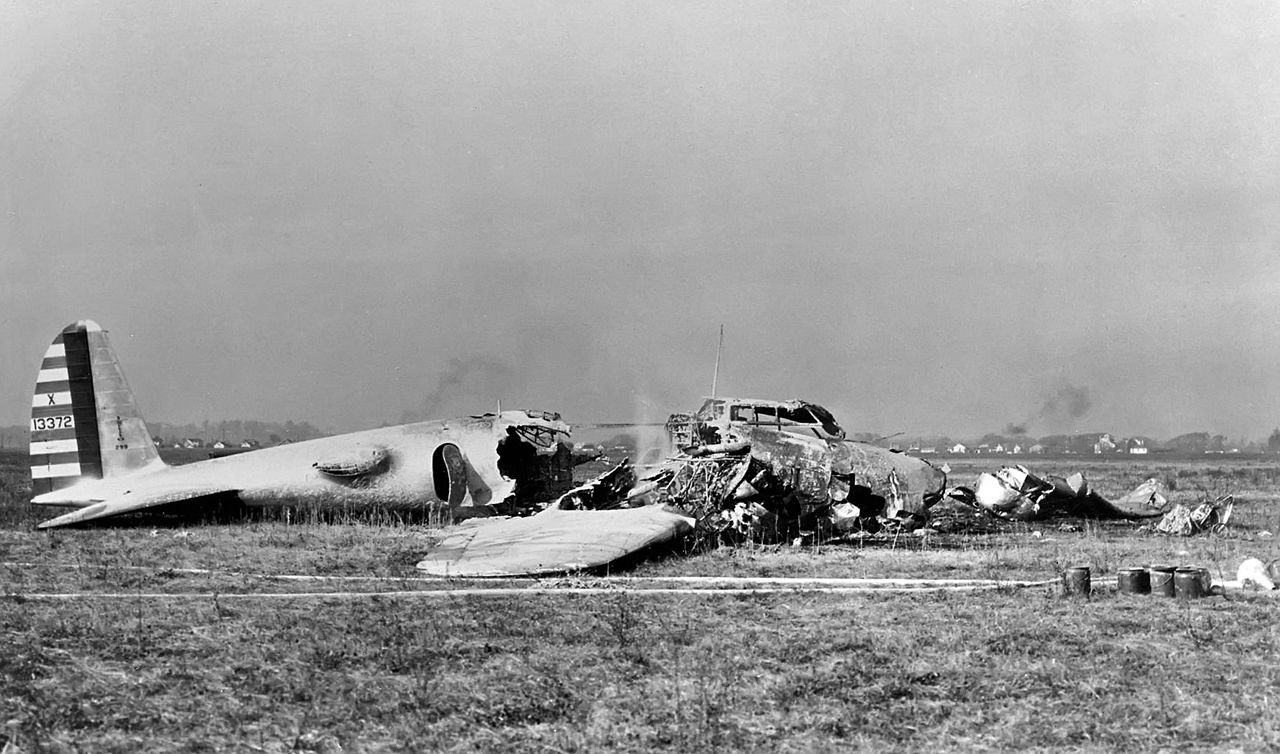 Regardless, the USAAC had been impressed enough by the prototype’s performance, that on 17 January 1936, through a legal loophole, the USAAC ordered 13 YB-17s (designated Y1B-17 after November 1936), for service testing. The YB-17 incorporated a number of significant changes from the Model 299, including more powerful Wright R-1820-39 Cyclone engines replacing the original Pratt & Whitneys. Although the prototype was company-owned and never received a military serial, the B-17 designation did not appear officially until January 1936, and the term XB-17 was retroactively used for the airframe and was so used to describe the first Flying Fortress. One important suggestion adopted was the use of a pre-flight checklist to avoid accidents such as that which befell the Model 299.

Between 1 March and 4 August 1937, 12 of the 13 Y1B-17s were delivered to the 2nd Bombardment Group at Langley Field in Virginia for operational development and flight tests. In one of its first missions, three B-17s, directed by lead navigator Lieutenant Curtis LeMay, were sent by General Andrews to intercept and photograph the Italian ocean liner Rex off the Atlantic coast. The mission was successful and widely publicized. The 13th Y1B-17 was delivered to the Material Division at Wright Field, Ohio, to be used for further flight testing.

Text and Photos courtesy of Wiki-Commons.