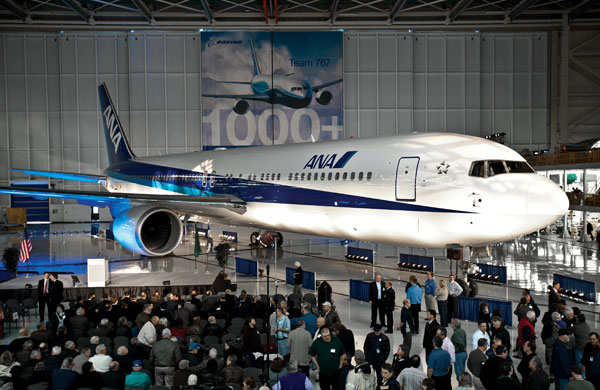 When the 1,000th Boeing 767—a 767-300ER—rolled off the original assembly line, history was marked in two ways. The rollout marks 29 years of service for the venerable wide-body twinjet just as 767 production moves to a new, smaller bay design to improve efficiency.

The 767 originally went into service in 1982, and it’s offered in three extended-range versions and a freighter variant that was launched in the 1990s. Sized between Boeing’s ubiquitous single-aisle 737 and its wide-body 777 stablemate, the 767 has been made into a tanker transport for Italy and Japan, and the Japan Air Self-Defense Force (JASDF) even has a quartet of airborne early-warning aircraft dubbed “E-767s.”

With a typical seating capacity of 181 to 245 passengers, 151 operators fly the 767 worldwide. More than 990 have been delivered, and the type is used on the trans-Atlantic route between the U.S. and Europe more than any other airliner. The 767 also pioneered the use of a two-member crew on a wide body and maintains common type rating with only one other aircraft—Boeing’s narrow-body 757.

All Nippon Airways has taken ownership of the 1000th 767, but before its delivery, it was the star of a ceremony at Paine Field in Everett, Washington—home of Boeing’s twin-aisle plant. Work on the 1,001th 767 on the new assembly line is already under way.—Mike Harbour