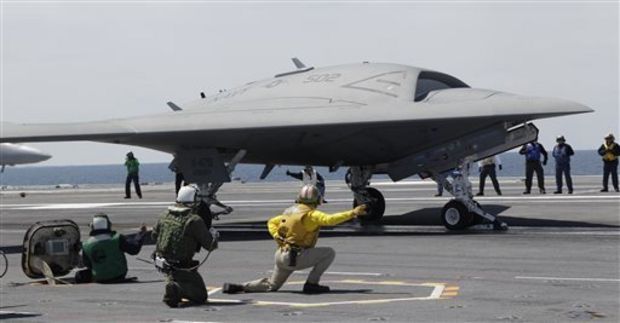 The U.S. Navy will attempt to land a drone the size of a fighter jet aboard an aircraft carrier for the first time Wednesday, showcasing the military’s capability to have a computer program perform one of the most difficult tasks a pilot is asked to do.

If all goes as planned, a successful landing of the Boeing X-47B experimental aircraft will mean the Navy can move forward with its plans to develop another unmanned aircraft that will join the fleet alongside traditional airplanes to provide around-the-clock surveillance while also possessing a strike capability. The aircraft’s success would pave the way for the U.S. to launch unmanned aircraft without the need to obtain permission from other countries to use its bases.

The X-47B will take off from Naval Air Station Patuxent River in Maryland before approaching the U.S.S. George H.W. Bush, which is operating off the coast of Virginia. The drone will try to land by deploying a tailhook that will catch a wire aboard the ship and bring it to a quick stop, just like normal fighter jets do. The maneuver is known as an arrested landing and has previously only been done by the drone on land at Patuxent River. Landing on a ship that is constantly moving while navigating through turbulent air behind the aircraft carrier is seen as a more difficult maneuver.

For the complete story by Carlie Kollath Wells of The (New Orleans) Times-Picayune, click here.