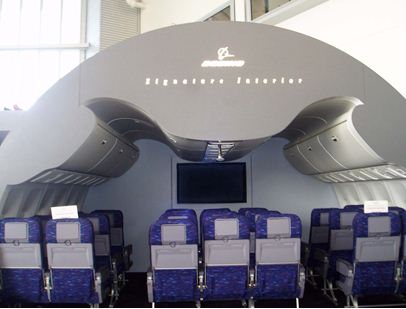 Hong kong – Boeing’s new 787 Dreamliner made its first commercial flight on Wednesday, giving a handful of deep-pocketed passengers the chance to fly into history on what is touted as an aviation breakthrough.

Carrying 252 people including corporate VIPs, aviation buffs and a large press pack, the All Nippon Airways (ANA) flight flew from Tokyo’s Narita airport to Hong Kong, where it was met by lion dancing and a water-jet salute.

“It was truly very memorable for me. After the day my kid was born and the day I was married, this is the most memorable experience in my life,” said the aviation enthusiast from Miami after he arrived in Hong Kong on the three-and-a-half hour flight.

The lightweight, fuel-efficient 787 is the first mid-sized plane able to fly long-haul. But critics had said the project might never take off as its development ran years behind schedule and billions of dollars over budget.

Painted in the blue and white ANA livery with red highlights, the first Dreamliner was finally delivered by Boeing on September 28, three years after it was originally promised to the plane’s launch airline.

ANA auctioned six business-class seats for Wednesday’s inaugural commercial flight. One sold for $34,000 — around 13 times the price of a regular business-class ticket between Tokyo and Hong Kong.

The winner of the eBay auction was 48-year-old Miami businessman Gino Bertuccio, according to the Wall Street Journal, which said he had mistyped his maximum bid amount but was still thrilled to be on the flight.

The newspaper said another delighted passenger was Thomas Lee, a 59-year-old Californian executive who flew on the maiden commercial flights of the Boeing 747 in 1970 and the Airbus A380 superjumbo in 2007.

At travel agencies in Japan, a discount ANA return economy ticket on the route in late October costs around 45,000 yen.

The Chicago-based aerospace and defence giant has also been touting the larger windows, bigger luggage storage bins and improved cabin humidity than conventional jets, a factor it says will reduce traveller fatigue.

“It’s an honour that ANA has chosen Hong Kong to be the first city to fly this beautifully designed and technically advanced aircraft,” he said.

Production delays and technical mishaps cost Boeing billions of dollars in lost or cancelled orders for the Dreamliner, giving an edge to its fierce European rival Airbus.

ANA is planning to use the 787 on regular flights to Beijing and Frankfurt, as well as Hong Kong.

Boeing is hoping the Dreamliner will be a hit with passengers it says want more non-stop travel, and says it is already the fastest-selling twin-aisle airplane in aviation history, with more than 800 orders since 2004.

With an average list price of $202 million, the plane is the firm’s first new design in more than a decade.