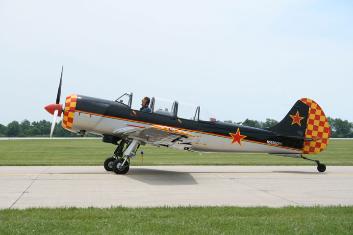 Search dogs have detected the body of a missing Indiana pilot in the wreckage of his small airplane, which was found Sunday morning — more than a week after the plane dropped off of radar, according to authorities.

The Yakovlev Yak-52 airplane belonging to Glenn Foy, 59, was found in Boone County at 8:40 a.m. ET by crews with the Indiana wing of the Civil Air Patrol in Boone County, said Civil Air Patrol Lt. Col. Tim Turner. The site of the wreckage is about 100 miles from Eagle Creek Airport in Indianapolis, where Foy was last seen on April 3, Turner said.

The aircraft was “impacted into the ground,” and recovery crews have not been able to gain access, but “we were just out there with cadaver dogs and they gave an indication that there is likely a body in the wreckage” Turner told NBC News from the site of the crash.

For video and the complete story by NBCNews.com, click here.