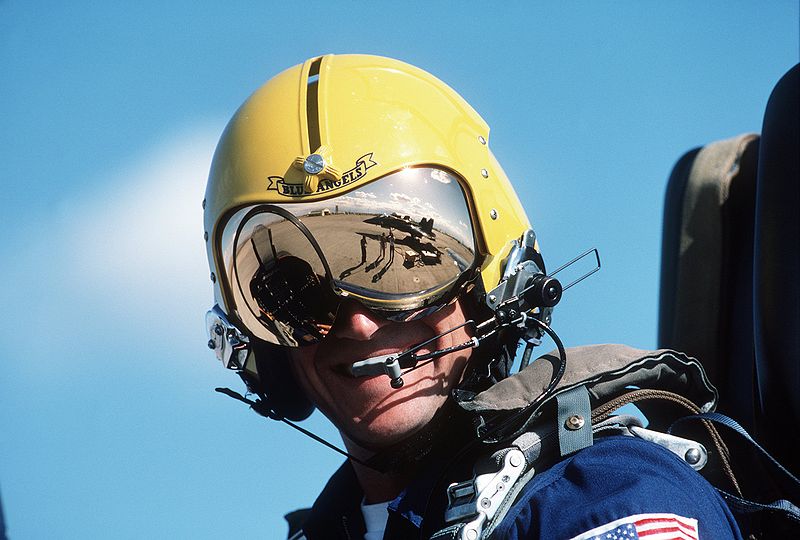 The United States Navy’s Navy Flight Demonstration Squadron, popularly known as the Blue Angels, was formed in 1946 and is currently the oldest formal flying aerobatic team. The squadron’s six demonstration pilots currently fly the F/A-18 Hornet in more than 70 shows at 34 locations throughout the United States each year, where they still employ many of the same practices and techniques used in their aerial displays in 1946. Since their inception, the “Blues” have flown a variety of different aircraft types for more than 427 million spectators worldwide.

History
On 24 April 1946 Chief of Naval Operations Admiral Chester Nimitz issued a directive ordering the formation of a flight exhibition team to boost Navy morale, demonstrate naval air power, and maintain public interest in naval aviation. However, an underlying mission was to help the Navy generate public and political support for a larger allocation of the shrinking defense budget. In April of that year, Rear Admiral Ralph Davison personally selected Lieutenant Commander Roy Marlin “Butch” Voris, a World War II fighter ace, to assemble and train a flight demonstration team, naming him Officer-in-Charge and Flight Leader. Voris selected three fellow instructors to join him (Lt. Maurice “Wick” Wickendoll, Lt. Mel Cassidy, and Lt. Cmdr. Lloyd Barnard, veterans of the War in the Pacific), and they spent countless hours developing the show. The group perfected its initial maneuvers in secret over the Florida Everglades so that, in Voris’ words, “…if anything happened, just the alligators would know.” The team’s first demonstration before Navy officials took place on May 10, 1946 and was met with enthusiastic approval.

On 15 June Voris led a trio of Grumman F6F-5 Hellcats, specially modified to reduce weight and painted sea blue with gold leaf trim, through their inaugural 15-minute-long performance at their Florida home base, Naval Air Station Jacksonville.[1] The team employed an SNJ Texan, painted and configured to simulate a Japanese Zero, to simulate aerial combat. This aircraft was later painted yellow and dubbed the “Beetle Bomb”.

The team thrilled spectators with low-flying maneuvers performed in tight formations, and (according to Voris) by “…keeping something in front of the crowds at all times. My objective was to beat the Army Air Corps. If we did that, we’d get all the other side issues. I felt that if we weren’t the best, it would be my naval career.” The Blue Angels’ first public demonstration also netted the team its first trophy, which sits on display at the team’s current home at NAS Pensacola.

On 25 August 1946 the Blue Angels switched to the Grumman F8F-1 Bearcat and in 1947 introduced the famous “diamond” formation at the World Air Carnival in Birmingham, Alabama.The team soon became known worldwide for its spectacular aerobatic maneuvers. On 25 August 1946 the squadron upgraded their aircraft to the F8F-1 Bearcat. In May 1947, flight leader Lt. Cmdr. Bob Clarke, replaced Butch Voris as the leader of the team, he introduced the famous Diamond Formation, now considered the Blue Angels’ trademark. In 1949, the team acquired a Douglas R4D Sky Train for logistics to and from show sites. The team’s SNJ was also replaced by a F8F-1 “Bearcat”, painted yellow for the air combat routine. The Blues transitioned to the straight-wing Grumman F9F-2 Panther on 13 July 1949, wherein the F8F-1 “Beetle Bomb” was relegated to solo aerobatics before the main show, until it crashed on takeoff at a training show in Pensacola in 1950.

1950s
The “Blues” continued to perform nationwide until the start of the Korean War in 1950, when (due to a shortage of pilots, and no planes were available) the team was disbanded and its members were ordered to combat duty. Once aboard the aircraft carrier USS Princeton the group formed the core of VF-191 (Satan’s Kittens).

The Blue Angels were officially recommissioned on October 25, 1951, and reported to NAS Corpus Christi, Texas. Lt. Cdr. Voris was again tasked with assembling the team (he was the first of only two commanding officers to lead them twice). In 1953 the team traded its Sky Train for a Curtiss R5C Commando.

The Blues remained in Corpus Christi until the winter of 1954, when they relocated to their present home at NAS Pensacola. It was here they progressed to the swept-wing Grumman F9F-8 Cougar.

F9F-8 Cougar formation in 1956The first Marine Corps pilot, Capt Chuck Hiett, joined the team and they relocated to their current home of NAS Pensacola in the winter of 1954. In August 1954, “Blues” leader LCDR Ray Hawkins becomes the first naval aviator to survive an ejection at supersonic speeds when his F9F-6 became uncontrollable on a cross-country flight.

In Sept 1956, the team added a sixth aircraft to the flight demonstration in the Opposing Solo position, and gave its first performance outside the United States at the International Air Exposition in Toronto, Canada. It also upgraded its logistics aircraft to the Douglas R5D Skymaster.

Grumman F11F-1 Tiger, 1957–69In January 1957, the team left its winter training facility at Naval Air Facility El Centro, California for a ten year period. For the next ten years, the team would winter at NAS Key West, Florida. For the 1957 show season, the Blue Angels transitioned to the supersonic Grumman F11F-1 Tiger, first flying the short-nosed, and then the long-nosed versions. The first Six-Plane Delta Maneuvers were added in the 1958 season.

1960s
In July 1964, the Blue Angels participated in the Aeronaves de Mexico Anniversary Air Show over Mexico City, Mexico, before an estimated crowd of 1.5 million people.

In 1965, the Blue Angels conducted a Caribbean island tour, flying at five sites. Later that year, they embarked on a European tour to a dozen sites, including the Paris Air Show, where they were the only team to receive a standing ovation.

The Blues toured Europe again in 1967 touring six sites. In 1968 Skymaster transport aircraft was replaced with a C-121J Constellation. The Blues transitioned to the two-seat McDonnell Douglas F-4J Phantom II in 1969, nearly always keeping the back seat empty for flight demonstrations. The Phantom was the only plane to be flown by both the “Blues” and the United States Air Force Thunderbirds. That year they also upgraded to the ‘Lockheed C-121 Super Constellation for logistics.

1970s
The Blues received their first U.S Marine Corps Lockheed KC-130F Hercules (Bureau Number 150690) in 1970. An all-Marine crew manned it. That year, they went on their first South American tour. In 1971, the team conducted its first Far East Tour, performing at a dozen locations in Korea, Japan, Taiwan, Guam, and the Philippines. In 1972, the Blue Angels were awarded the Navy’s Meritorious Unit Commendation for the two-year period from March 1, 1970 – 31 December 1971. Another European tour followed in 1973, including air shows in Tehran, Iran, England, France, Spain, Turkey, Greece, and Italy.

In December 1974 the Navy Flight Demonstration Team downsized to the subsonic Douglas A-4F Skyhawk II and was reorganized into the Navy Flight Demonstration Squadron. This reorganization permitted the establishment of a commanding officer (the flight leader), added support officers, and further redefined the squadron’s mission emphasizing the support of recruiting efforts. Commander Tony Less was the squadron’s first official commanding officer.

All six Blue Angel A-4F Skyhawks executing a “fleur de lis” maneuver.[edit] 1980s
A Blue Angels Flight Demonstration Squadron pilot sits in the cockpit of an F/A-18 Hornet aircraft
F/A-18s Performing in San FranciscoOn 8 November 1986 the Blue Angels completed their 40th anniversary year during ceremonies unveiling their present aircraft, the McDonnell Douglas F/A-18 Hornet, the first multi-role fighter/attack aircraft. The power and aerodynamics of the Hornet allows them to perform a slow, high angle of attack “tail sitting” maneuver, and to fly a “dirty” (landing gear down) formation loop, the last of which is not duplicated by the Thunderbirds.

Also in 1986, LCDR Donnie Cochran, joined the Blue Angels as the first African-American Naval Aviator to be selected. He would return to lead the team in 1993.

“ Today is a very special and memorable day in your military career that will remain with you throughout your lifetime. You have survived the ultimate test of your peers and have proven to be completely deserving to wear the crest of the U.S. Navy Blue Angels. The prestige of wearing the Blue Angels uniform carries with it an extraordinary honor – one that reflects not only on you as an individual, but on your teammates and the entire squadron. To the crowds at the air shows and to the public at hospitals and schools nationwide, you are a symbol of the Navy and Marine Corps’ finest. You bring pride, hope and a promise for tomorrow’s Navy and Marine Corps in the smiles and handshakes of today’s youth. Remember today as the day you became a Blue Angel; look around at your teammates and commit this special bond to memory. “Once a Blue Angel, always a Blue Angel,” rings true for all those who wear the crest of the U.S. Navy Blue Angels. Welcome to the team. ”
—The Blue Angels Creed, written by JO1 Cathy Konn, 1991–1993

2000s
In 2006, the Blue Angels marked their 60th year of performing. On 30 October 2008 a spokesman for the team announced that the team would complete its last three performances of the year with five jets instead of six. The change was because one pilot and another officer in the organization had been removed from duty for engaging in an “inappropriate relationship”. The Navy stated that one of the individuals was a man and the other a woman, one a Marine and the other from the Navy, and that Rear Admiral Mark Guadagnini, chief of Naval air training, was reviewing the situation. At the next performance at Lackland Air Force Base following the announcement the No.4 or slot pilot, was absent from the formation. A spokesman for the team would not confirm the identity of the pilot removed from the team. On 6 November 2008 both officers were found guilty at an admiral’s mast on unspecified charges but the resulting punishment was not disclosed.

Fat Albert performed its final JATO demonstration at the 2009 Pensacola Homecoming show, spending their 8 remaining JATO bottles. This demonstration not only was the last JATO performance of the squadron, but also the final JATO profile of the entire US Marine Corps.

2010s
On 22 May 2011, The Blue Angels were performing at the Lynchburg Regional Airshow in Lynchburg, Virginia, when the Diamond formation flew the Barrel Roll Break maneuver at an altitude that was lower than the required minimum altitude. The maneuver was aborted, the remainder of the demonstration canceled and all aircraft landed safely. The next day, the Blue Angels announced that they are initiating a safety stand-down, canceling their upcoming Naval Academy Airshow and returning to their home base of Pensacola, Florida, for additional training and airshow practice. On 26 May, the Blue Angels announced they would not be flying their traditional fly-over of the Naval Academy Graduation Ceremony and that they were canceling their 28–29 May 2011 performances at the Millville Wings and Wheels Airshow in Millville, New Jersey.

On 27 May 2011, The Blue Angels announced that Commander Dave Koss, the squadron’s Commanding Officer, would be stepping down. He was replaced by Captain Greg McWherter, the team’s previous Commanding Officer. The squadron canceled performances at the Rockford, Illinois Airfest 4–5 June and the Evansville, Indiana Freedom Festival Air Show 11–12 June to allow additional practice and demonstration training.

Between 2 September and 4 September 2011 on labor day weekend, the Blue Angels flew for the first time with a 50-50 blend of conventional JP-5 jet fuel and a camelina-based biofuel at Naval Air Station Patuxent River airshow at Patuxent River, Maryland. McWherter flew a F/A-18 test flight on 17 August and stated there were no noticeable differences in performance from inside the cockpit. 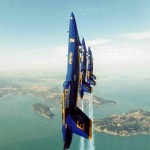 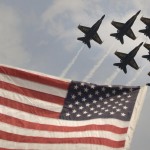 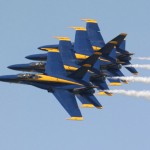 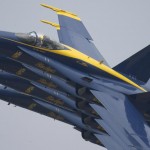 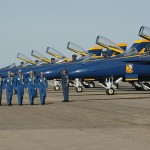 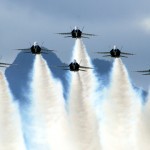 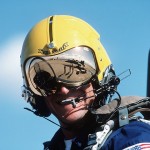