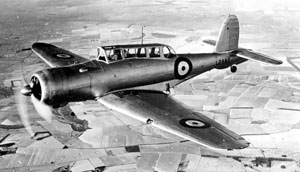 OSLO, Norway – A British Blackburn Skua dive-bomber that crashed-landed on a Norwegian fjord while attacking Nazi invasion forces in April 1940 has been recovered after 68 years under water, the project leader said Wednesday.

Klas Gjoelmesli, leader of the volunteer project, said he believes the plane will be the only complete example of the dive-bomber in the world after restoration, which will take several years, is completed.

“We can built it up again. The wings are there, and the cockpit is OK,” Gjoelmesli said by mobile telephone from the central Norway city of Trondheim, where the wreck was brought by ship from the nearby fjord.

The Blackburn Skua, flown by British Wing Cmdr. John Casson, was leading a dive-bomber attack on the German battleship Scharnhorst that was moored in Trondheim during the opening days of the Nazi invasion of Norway, which began April 9, 1940.

“It is forgotten history,” said Gjoelmesli. He said the Blackburn Skuas were among the few Allied planes involved in the defense of central Norway, since they could be launched from aircraft carriers in the North Sea or had just enough fuel range to stage attacks from the Orkney Islands, off the northern tip of Scotland.

According to Gjoelmesli, several of the Blackburns were shot down and crashed during the raid, but the one recovered late Tuesday crash-landed on the water, so that its pilot and gunner survived. He said its registration number, L2896, could be seen on the wreckage.

The aircraft, which was discovered in 2007, was raised from a water depth of 242 meters (794 feet) in an effort that involved a crane barge, a research ship and remotely operated submarines, largely operated by volunteers and with help from marine technology students from The Norwegian University of Science and Technology in Trondheim as part of a special project.

According to the National Norwegian Aviation Museum in the northern town of Bodoe, where the Blackburn Skua will be displayed when restoration is completed, 192 of the aircraft were built, and about 30 of those were lost over Norway.

Another Blackburn Skua was recovered from a Norwegian lake in 1974, but was incomplete. It is now on display in unrestored condition at the Fleet Air Arm Museum, in Yeovilton, southwest England.