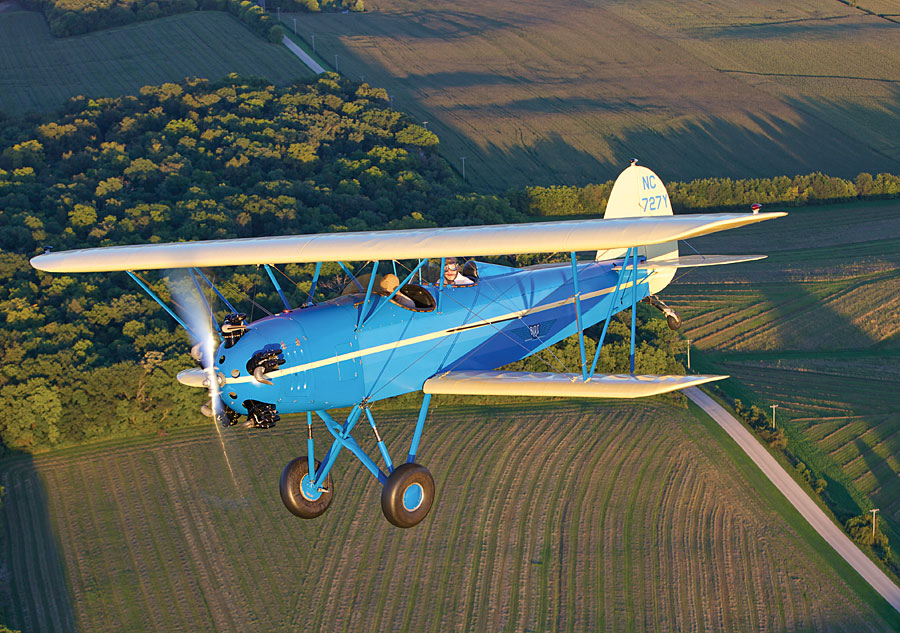 In 1929, Brunner-Winkle had a hit with their Bird model A biplane, but by the end of the 1920s, even the seemingly inexhaustible supply of surplus Curtiss OX-5 engines had begun to dry up. Airframe manufacturers were scrambling to find new engines, and at the same time, engine manufacturers had seen the writing on the wall, and were building a series of new moderately small radial engines like the 100hp Kinner K5 and Warner Scarab series. Michael Gregor, chief engineer of the B-W firm, got busy redesigning the Bird for the soon-to-be-popular radials, with the Kinner-powered version designated the BK.

Charles A. Lindbergh was known as a very particular pilot, one who wanted everything “just so.” When he chose an airplane in which to teach his new bride Anne how to fly, he decided the Brunner-Winkle Bird was a solid, well-manufactured airplane with excellent manners. In fact, he picked this very Bird BK, s/n 2037-16, NC727Y, which he purchased for $3,500 on August 1930, registering it in Anne’s name.

Starting that fall, and well into the spring of 1931, Anne and Charles were seen in the skies of Long Island, New York, with Anne struggling to learn the intricacies of landing. Finally, late in the spring, she mastered landings well enough for her husband to turn her loose for her solo flight. With feelings that any pilot can understand, she was elated when she was awarded her pilot’s certificate on May 29, 1931.

After learning to fly with the Bird, it was sold back to the factory at the end of October, and it soon bounced around different owners in New Hampshire, Connecticut, and Massachusetts.  Eventually it found a home with Joe Fischera, recently mustered out of the military. He purchased the biplane in April of 1946. He really wanted an airplane — it took all the money he had, plus some he had to borrow, a total of $600. Sadly, he never got to fly it, as it was wrecked in a wind storm just a month later. But he didn’t give up on the “Lindbergh Bird.”

Read the full article from the April 201 issue of Flight Journal.