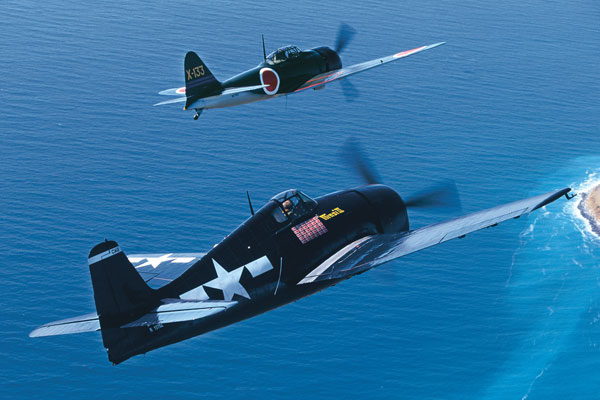 “I had well over 1,000 hours of time in the air before I entered combat. Most of that was as an instrument instructor flying the SNJ. Instrument flying really teaches you the finer points of flying an airplane. It also makes you focus and for some reason I found that it carried over to gunnery work in the Hellcat as well. Every time I got behind a Japanese airplane I was very focused as my bullets tore into them!” —Lin Lindsay

I joined VF-19 “Satan’s Kittens” as one of its founding members in August of 1943. We gathered at Los Alamitos, California, and “Fighting Nineteen” was supplied with a paltry sum of airplanes; an SNJ, a JF2 Duck, a Piper Cub, and a single F6F-3 Hellcat. Most of them were not much to write home about as far as fighters go except of course, the F6F. To me, the Hellcat was a thing of beauty. It was Grumman made and damn near indestructible! As a gun platform it was hard hitting with six .50 caliber machine guns in the wings, bulletproof glass up front and armor protection for the pilot. It was certainly better than anything the Japanese had, especially with self-sealing gas tanks, better radios, better firepower and better trained pilots.

Our skipper was Lt. Commander Theodore Hugh Winters, a combat veteran fighter pilot and a great leader. He worked our group up with great skill, and increased our Hellcat numbers as we learned how to fight and survive against the Japanese fighters. We also learned one of our primary purposes; stick with the dive-bombers and torpedo planes while on escort duty. Our sister torpedo and dive-bomber squadrons depended on us to shepherd them in and out of harm’s way. Tempting as it was, breaking away from them to add a small Japanese flag to the side of a Hellcat meant that those slow-moving torpedo and dive-bombers were sitting ducks. But once released from escort duty, the Hellcat showed its deadly claws when we finally entered the combat zone.