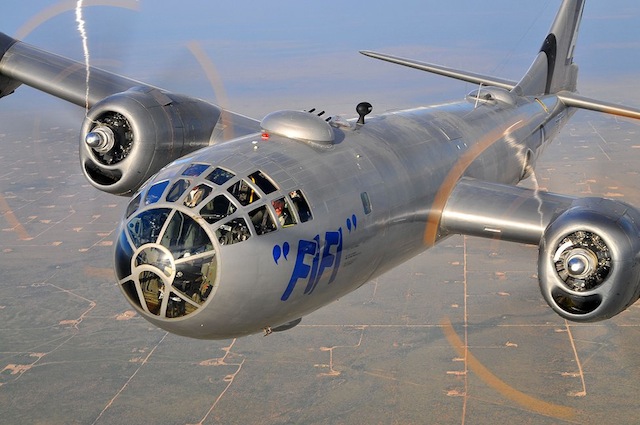 It took a few minutes for Staff Sgt. Oliver Hantak, 92, and First Lt. Jack Jerred, 90, to climb into the world’s only flying Boeing B-29 Superfortress, the Commemorative Air Force’s iconic “Fifi,” on Thursday afternoon at Wisconsin Aviation in Madison, Wis. It had been 67 years since either of the World War II veterans and Madison residents had been on the same type of aircraft that released the atomic bombs over Hiroshima and Nagasaki, which led to the end of the war.

“With winds like this, we sure will jump off the ground,” said Jerred before the plane, powered by four 2,200 horsepower engines and a 141-foot wingspan, took off from the tarmac. While both of the veterans on board said it brought back a lot of memories, their 25-minute flight around Madison didn’t quite resonate with their experiences during wartime. Then, Hantak said, bullets ripped through his aircraft several times on tours over India and China.

“It wasn’t quite the same experience,” Hantak, who served as an aerial photographer aboard a converted B-24 from 1941 to 1945, said after Thursday’s flight. “But boy was that fun.”

For the complete story by Jack Cullen of the Wisconsin State Journal, click here.