The good folks at the B-25 History Project have a new restoration underway: a rare 8-gun “strafer” nose that only a few restored B-25s are outfitted with. Interestingly, this nose configuration was only a modification–no B-25s were originally outfitted with it–and these nose types were mainly used in the Pacific Theater, where pilots had an easier time strafing ships rather than bombing them. This excerpt from a post at the B-25 History Project details how they found the 8-gun nose and provides some interesting facts about B-25 production and development.

The B-25 was developed as it was built. In short, that meant that the design was constantly being changed and improved. The early B-25s were neither heavily armed nor heavily armored. Both of these issues would gradually be increased with each successive model up to the pinnacle of B-25 production, the J Model. As a World War was being fought, differing theaters required different armament solutions. Knowing this, North American Aviation had field service representatives embedded with Bomb Squadrons all around the globe. Their purpose was to continually monitor the quality of North American products and provide feedback to the engineers at home for improvements in both quality and design.

Many “field modifications” supervised by these field service representatives did indeed make their way back into production. Most notable, were adaptations to the B-25s fire power. Early B-25C and D models did not have nearly enough forward fire power for many theaters. Field service representatives used spare .50 caliber machine guns and crafty mechanics to fashion early “cheek guns”. The factory soon fabricated a kit to modify existing B-25s both in the field as well as modification centers around the globe. Eventually, those changes were made at the assembly line level. Another competing modification was the addition of several .50 caliber machine guns to the glass bombardier nose. These were mostly seen in the pacific theater as it was much easier to strafe a ship than bomb it from above. North American Aviation Field Service representatives worked with the legendary Pappy Gun on some of these modifications. Again, the suggestions were brought back to the factory, and another kit would be made to modify existing B-25s.

This is a great time to note that the 8 gun nose modification was ALWAYS a modification. They were not actually built at the plant, but modified there. There are photos of 8 gun nose B-25s that appear to be in the plant, but they are actually on the first part of the modification line. This is the reason that the block number on an 8 gun strafer is different. All blocks end in a 0, 1, or a 5. Anything else denotes a modification. For example, if a B-25J-20 is modified with an 8 gun nose, you may see it labeled as a B-25J-22. Although this is most common, it is not exclusive. If this plane were further modified, it may be changed to a B-25J-23. It is also worthy of noting that if you see a B-25J-22, it does not mean the B-25 carried an 8 gun nose. Sound confusing? Well, it certainly can be.

So now you know that the 8 gun strafer nose came in a box with everything you need to modify your B-25H or B-25J. In reality, the noses could (and were) put on B-25C and B-25Ds as well. As it turns out, at the end of the war, there were many of these 8 gun kits setting in government warehouses around the United States. Our nose was one such kit. Many of the 8 gun kits were used in TB-25N conversions. When stripped of all the weapon systems inside, the big open cavity of an 8 gun nose was perfect for the addition of new radio, radar, and navigation equipment. Ours was placed on a B-25J-25-NC SN 44-30324 in 1954. It remained on that airframe until the winter of 1992 when replaced by a glass bombardier nose. During that time she was seen at many airshows as “I See No Problem” and then “Snow White II”. It is in that paint that we found her quite literally sitting in the middle of nowhere for over 20 years.

Those that know the project, know that our mission is to preserve and honor the history of the B-25 and the men and women who built, flew, and maintain them; past, present, and future. To that end, our goal is to restore the nose to the condition that it would have left Kansas City in. This process will be slow and tedious, taking several years to complete. To complete it to the level we are going for will also be expensive. Many of the parts found inside an 8 gun nose are extremely rare, or in some cases just not available. Although we have already recovered a large amount of what is needed, we will have to remanufacture a good amount as well. Your donations will keep us working on this project. Our goal is to complete this restoration while we still have Rosies around to appreciate it. We can only do that with your help. Click here to become a member. 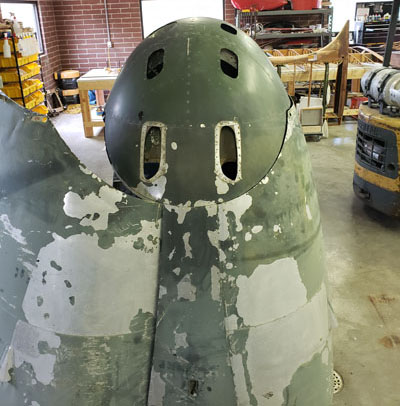 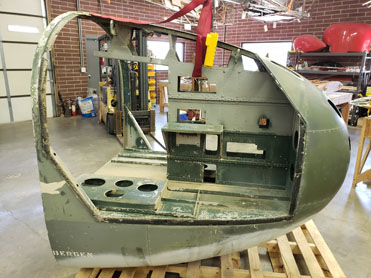 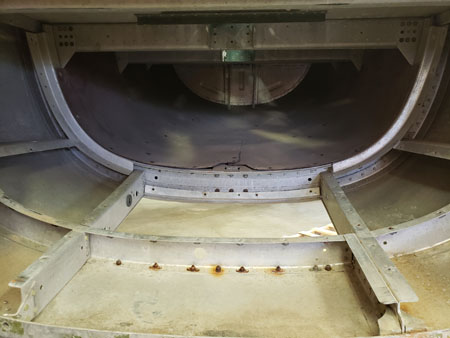