Video courtesy of Collings Foundation.
Now you can own your own B-24 Liberator and best of all it’s an amazing, scale looking ARF with fully built up  wood construction and loaded with details. Thanks to VQ WARBIRDS YOUR WAIT IS OVER! 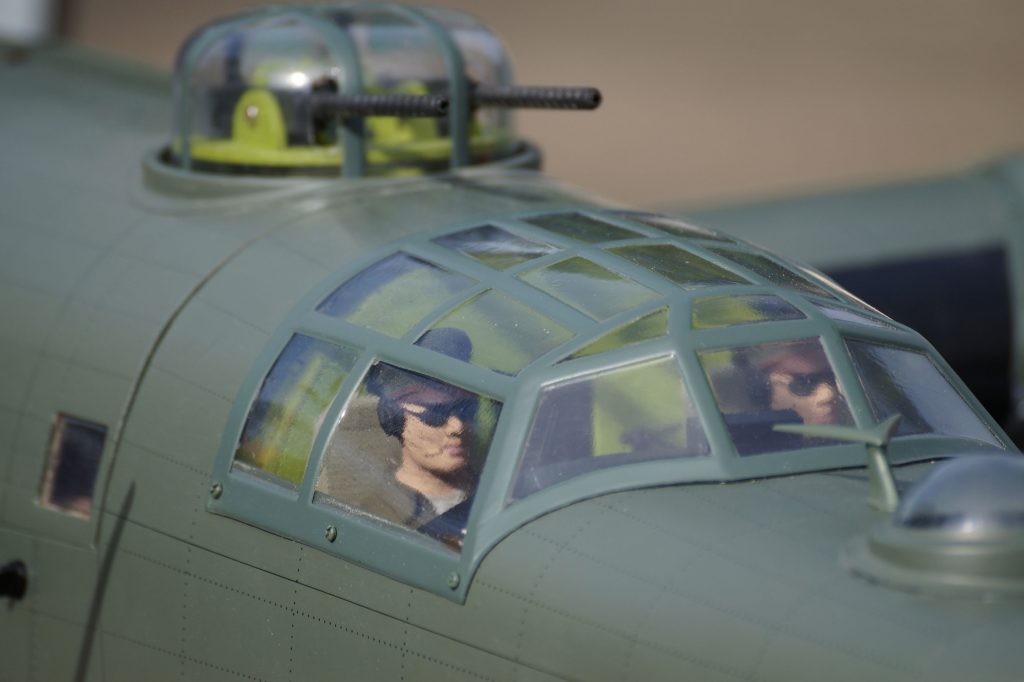 With an impressive 110-inch wingspan, this B-24 LIBERATOR ARF is expected to be available at the end of January or in early February 2019!

Film-covered models feature panel lines, rivets, access hatches and more surface detail featured in the covering details. Models only have Star-n-Bar Insignias applied, all other markings are not. Each color B-24 features different decal sheets. Silver/Aluminum B-24 models come with markings for 90th Bomb Group 320th Bomb Squadron. Olive/Gray B-24 models have a decal sheet for the popular “Witchcraft”.  Models do not have any accent colors applied.

The VQ Warbirds B-24 Liberator models come completely covered in either Olive/Gray or Silver/Aluminum; this allows almost unlimited customization of final markings by aircraft owner! We highly recommend custom graphics from Callie Graphics: 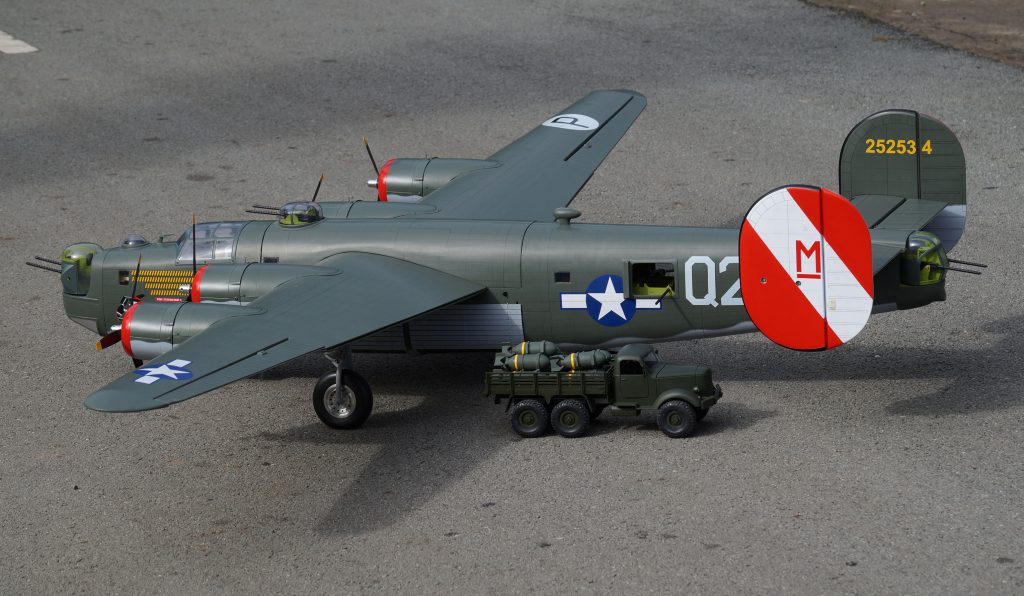 Pilot and Co-Pilot figures, dash, yokes and seat details are included as well as the forward and rear antenna.

Straight from the factory, the VQ B-24 features prototypical styled Roll-Up bomb bay doors. These can be set open or

closed between missions, without needing servos to operate them. If modeler wishes to make the doors servo operated,

the modeler may incorporate that feature on his/her own (devices to do this are not included). 16-Piece scale bomb set

with bomb racks. Releasing the (16) bombs is easy with 4 micro or mini servos (videos coming soon).

All four (4) gun turrets come with scale machine guns, and are operable by servo function straight out of the box!

Waist gunner positions even have the B-24 air/wind deflectors and waist guns!

A 3-D printed enhanced scale pilot/co-pilot seats are a scale add on accessory that will be available in February. 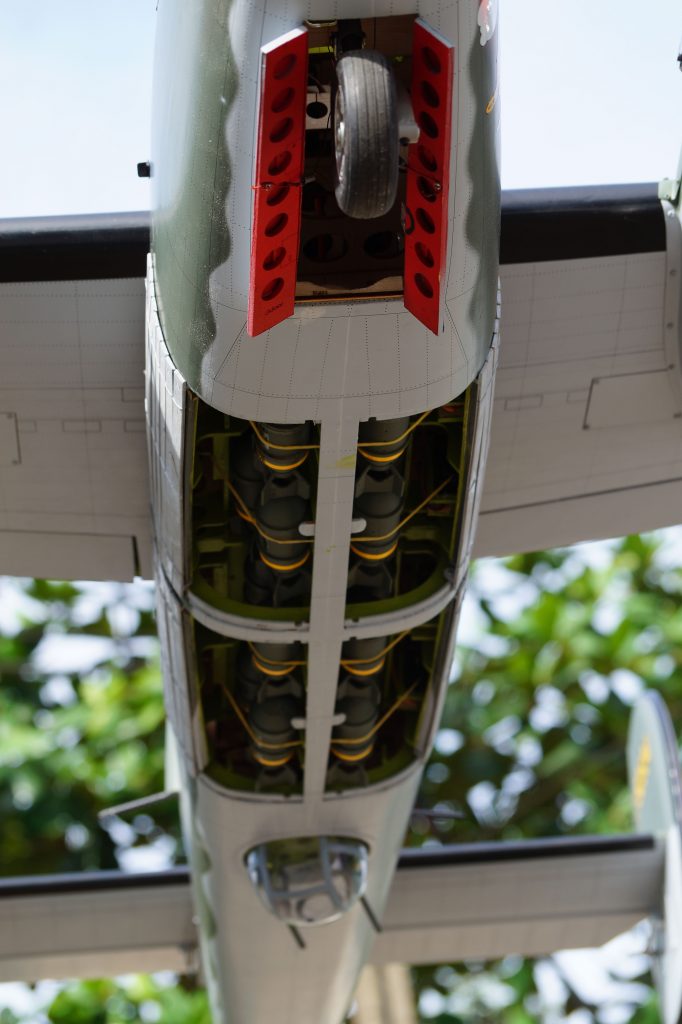 The VQ Warbirds’ B-24 Scale Landing Gear with Scale Wheels by Robart are a work of art! Scale wheel design is exclusive to this model.

Robart painstakingly machined inside and outside hubs with great detail not previously seen on any other scale Robart wheels!

Even the inside lip of the wheel has grooves machined into the wheel. The main landing gear have the signature shock absorbing Oleo struts with lower side braces and drag braces. Main Wheel diameter is 4.5 inches and 3-inch nose wheel diameter. Gear are available in electric and pneumatic exclusively through VQ WARBIRDS! 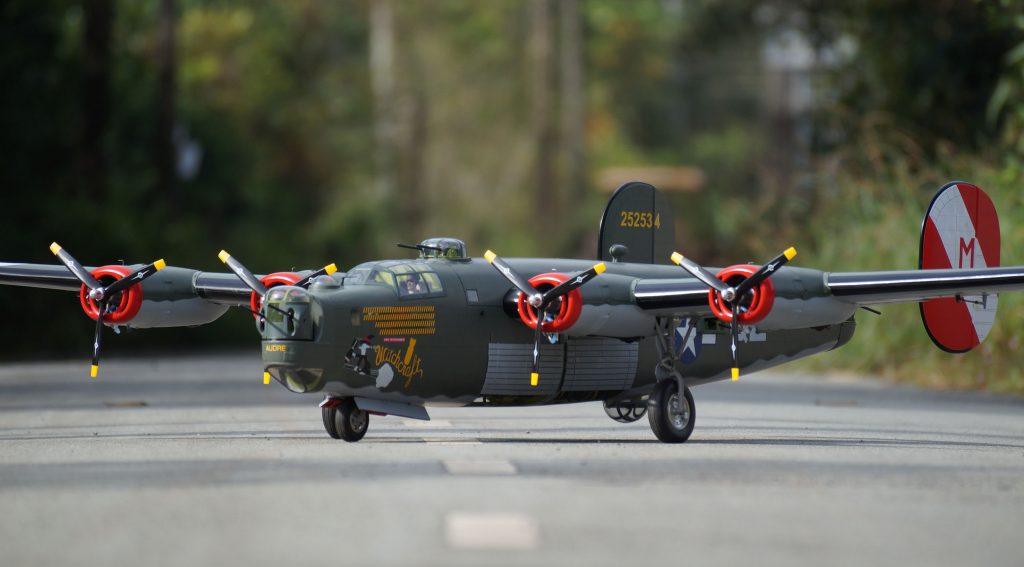 Retracts (not included): VQ B-24 Scale Retracts and Scale Wheels custom (manufactured by Robart), are available in electric and pneumatic drive versions. 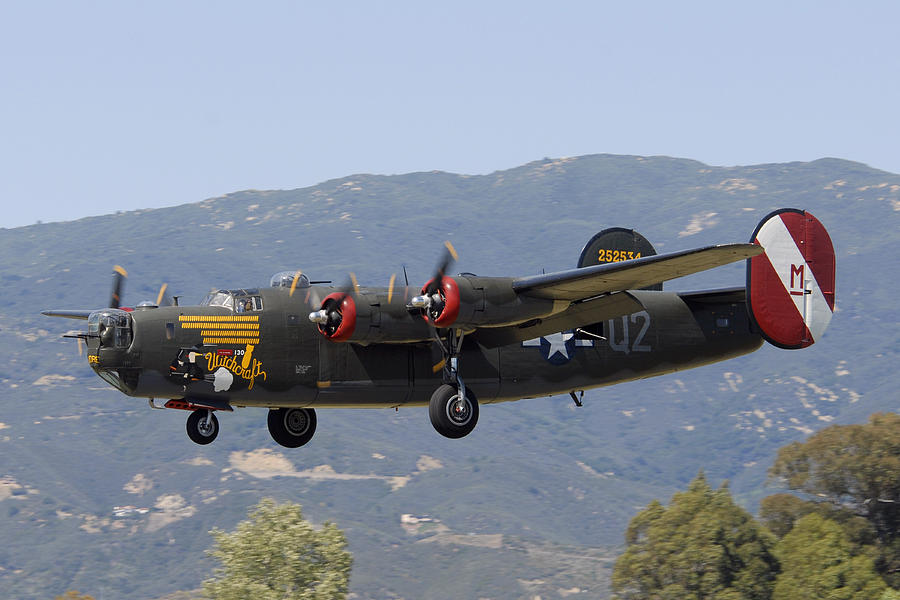 The Consolidated B-24 Liberator was designed with the high aspect-ratio Davis Wing. In combat, the wing had drawbacks as far as durability was concerned, but it increased fuel efficiency and gave the B-24 a longer range than the Boeing B-17 Flying Fortress. On December 29, 2014, the Consolidated B-24 Liberator, one of the most famous bombers of World War II, turned 75 years old. More than 18,400 were built, making it the most produced American wartime aircraft. It gained a distinguished war record with operations in the European, Pacific, African and Middle Eastern theaters. 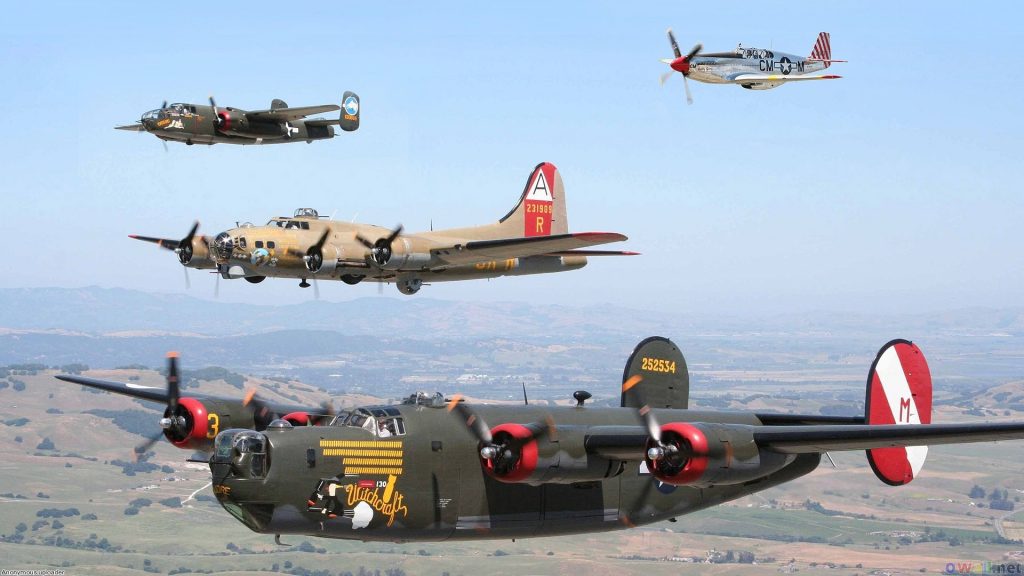