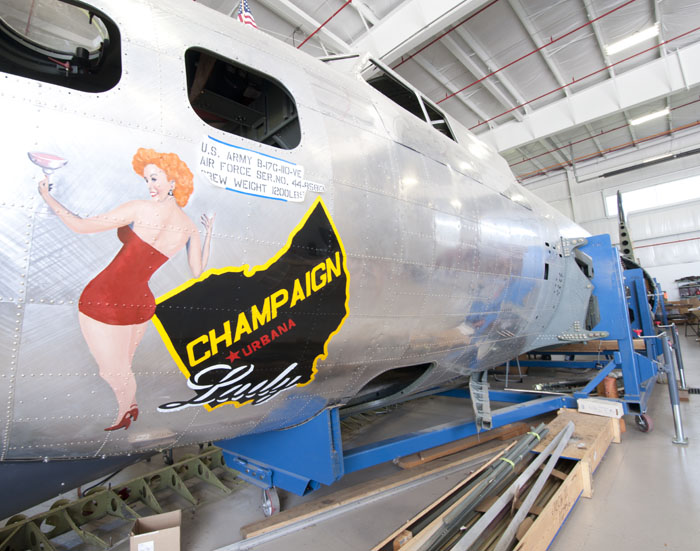 WarbirdsNews has received the latest installment from the restoration team working to return “Champaign Lady” back to flying condition. The Boeing B-17G Flying Fortress, based around the remains of Golf model serial 44-85813, is coming together in leaps and bounds now, following nearly a decade of hard work repairing/remanufacturing the various components and subcomponents. The team has chronicled their latest endeavors so well, we felt our readers would enjoy reading them too… so here is their latest update:

Spring is the season when our clocks are set forward, and in that spirit, Champaign Lady is moving forward as well. March 2014 sees the volunteers at the Champaign Aviation Museum in Urbana, Ohio, making terrific progress on Boeing’s iconic bomber. Under the direction of David Shiffer and Randy Kemp, the orchestra of volunteers are making the hangar sound like a symphony hall, although the instruments are drills, milling machines, and rivet guns.

From nose to tail, and wingtip to wingtip, sections of the airplane are growing. Among the most complex parts are the engine nacelles. These four parts, when mounted on the wings, will be the equivalent of aluminum icebergs: what you see on the surface is less than 5 percent of what is actually there. The nacelles enclose and streamline the engines, mounts, generators, hydraulic pumps, accessory drives, the cowl flap mechanisms, cables, hoses, pulleys, air inlet, exhaust and turbocharging systems. While it is a challenge to build just one, the volunteers have four to complete and, of course, each one is different. Their construction, and the techniques developed to build them have been daunting. Yet, despite the trigonometry involved, each week sees more and more pieces installed as they seemingly evolve into the proper shape. Even in their unfinished condition, it is easy to see why 14,000 hours has been invested in their manufacture to date.

For photos and the complete story via Warbirds News, click here.