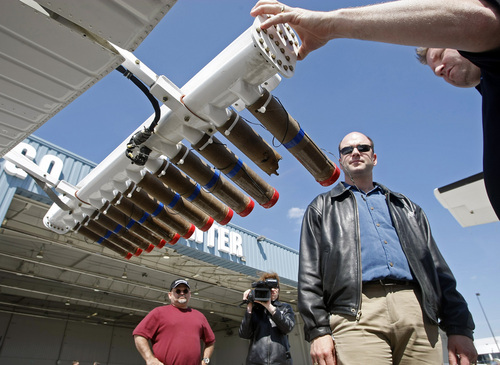 FARGO — Anthony Nalli is a longtime pilot, and the executive producer and one of the hosts of the popular PBS television show “The Aviators.”

But he had never flown a helicopter before climbing aboard a simulator at the University of North Dakota’s School of Aerospace Sciences in Grand Forks.

“I tell you, I got a whole new respect for helicopter pilots,” Nalli said.

“It’s like standing on a basketball, no kidding. The balancing act is unbelievable,” said Nalli, who was in North Dakota this week to film segments for “The Aviators” at UND and at Weather Modification Inc., a Fargo-based business that does just what its name implies.

“They just wanted to know what we do and how do we do it, the basic physics of it,” said Hans Ahlness, vice president of operations at Weather Modification.

“It’s TV, so they’re looking for gee-whiz stuff. And flying around thunderstorms gets people excited,” said Ahlness, who stressed that pilots for Weather Modification get close enough to storms to seed clouds with chemicals, but they don’t make the mistake of thinking they can fly through a heavy thunderstorm.

“When I start a student pilot out, the first thing I’m going to tell ’em is: ‘If you see a thunderstorm, you stay far, far away from it,’’’ Ahlness said.

“We’re just working with the storm and whatever the storm will let us do,” he added.

Nalli had a different take.

“I think these guys might be a little crazy,” he said.

“In all of my training, if you’re 15 to 25 miles away from a thunderstorm that’s great, keep going the other way,” Nalli said.

“These guys,” he said, “skirt the edges of thunderstorms to do some very, very important work. But as a pilot, I can’t even imagine how you do that.”

The footage shot in North Dakota will appear in the third season of “The Aviators,” which Nalli said will start airing on many PBS stations in September.

The first two seasons have aired on area Prairie Public stations, but the show has been on hiatus locally as stations wait for the third season.

In season one, Nalli took the controls of a simulator in Toronto to see if a private pilot could land an airliner.

In a segment shot for season two, Nalli again took to a simulator to see if a private pilot could land an airliner that had lost one engine.

“That was very difficult, I can tell you,” he said.

That does not come without risk.

“Our planes have dents in them from hail and we get hit by lightning, occasionally,” Ahlness said.

Nalli said the segments shot in North Dakota fit well with the premise of “The Aviators.”

“It’s about all things aviation. We like to say it’s the people, places and planes of North American aviation,” he said.

“For people who aren’t familiar with the show, it’s not by pilots for pilots,” Nalli said. “It’s anyone who has even a passing interest in aviation.”

He said some viewers write to say the show inspired them to sign up for flying lessons. “And now they’re pilots,” he said.

Dave Olson is a reporter at The Forum of Fargo-Moorhead, which is owned by Forum Communications Co.