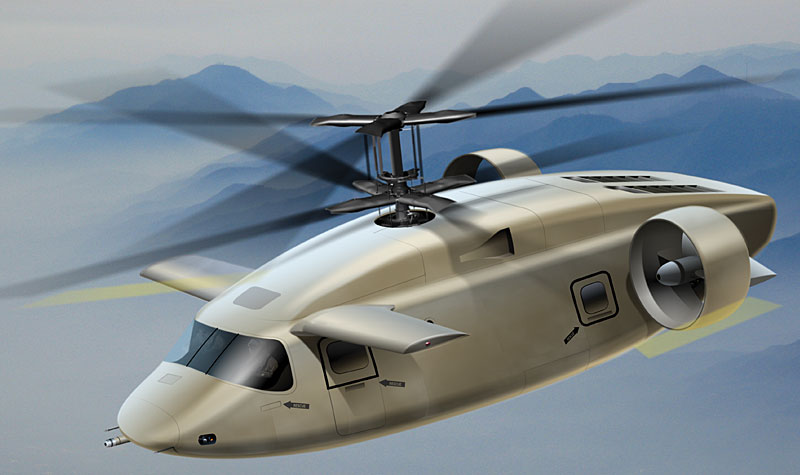 By Sergei I. Sikorsky

The following comments on the future of the helicopter are personal opinions and are to be valued as such. The writer reserves the right to change them, if needed. Some time ago, the great Yogi Berra said, “Predictions are very tricky, especially if they’re about the future!” Yogi’s comment is as valid today, as it was when he first spoke those words. It seems especially true when attempting to predict the future of an industry as volatile as today’s helicopter industry. However, there are several basic truths that remain constant.

One of those basic truths was identified by Igor Sikorsky, during the first showing of his helicopter to a small group of scientists in May of 1940. One of them asked,“When would a helicopter go faster than an airplane? Do you know that?” Igor Sikorsky answered, “Yes, I know. The answer is never.” The scientist asked “When would the helicopter be more efficient than the airplane?” Sikorsky answered, “Yes, I know the answer … never. But, the helicopter will do a number of jobs that no airplane will do. And, in fact, nothing else will do … except another helicopter!”

During the following years, that comment has been confirmed, time after time. Today, the helicopter is a valuable tool, both militarily and in many civil jobs as well. Based on current operations and emerging technologies, and my trusty crystal ball, some general predictions about the future of helicopters can be offered. There is growing interest, both civil and military, in increasing the cruise speed of the helicopter. A growing civil market is the support of off-shore drilling platforms, and, as these platforms steadily move further and further off-shore, interest grows in longer-range, faster helicopters. Counter-terrorist operations are generating a specialized breed of skilled rapid-reaction combat teams. They lead a general military requirement for higher cruise speeds in military helicopters. One solution is already flying, several others are in the works.

Today, the V-22 “Osprey” is operational with the Marines and the Air Force. It is the result of some 50 years of tilt-rotor research by Bell and more recently, partnership with Boeing. It carries up to 24 troops and cruises at 230-250mph. Over 200 V-22’s are operated by the Marines, and about 24 by the U.S. Air Forces’ Special Operations Command (SOCOM). Long-range plans call for a total of 360 V-22s for the Marines and 50 for SOCOM. Though the Bell-Boeing team is busily trying to sell additional V-22s around the world, the unit price of around $75 million dollars per aircraft is a major problem. As of now, a total of 410 Osprey’s are planned with the last aircraft scheduled for delivery in 2021.

Agusta-Westland is also developing a smaller tilt-rotor, the AW 609. The 609 started as a joint Bell-Agusta program, but is now an Agusta-Westland project. Much smaller than the V-22 (16,000 lb. gross versus the V-22’s 52,000 lb. gross) the AW 609 carries six passengers at a cruise speed of 260-270mph. Two prototypes are flying; two more are being built. Probably too small for military use, it could sell as a VVIP transport. One problem is price; estimated at about $30 million. Another will be certification, since the tilt-rotor concept is new to fairly conservative certification authorities.

Today, most helicopters cruise in the 140-160mph range. Both military and civil operators would like the next-generation machines to cruise at 240-260mph. It must be noted that these speeds have been demonstrated, in the past years, by a number of highly-modified experimental helicopters. A partial review shows the following:

In June, 2013, the U.S. Army’s Joint Multi Role (JMR) program became a reality with the selection of four designs for a proposed medium-sized technology demonstrator. One of the requirements is for a 220-230mph cruise speed. It is planned to evaluate the new helicopters starting in 2017-2018. Sikorsky has teamed with Boeing and is expected to submit a variant of the X-2. Bell is teamed with Lockheed; submitting a variation of the tilt-rotor designated the V-280 Valor. A new competitor, AVX Aircraft is designing a coaxial helicopter with two rear-mounted ducted fans for additional forward thrust. Newcomer Karem Aircraft is submitting a tilt rotor design. Obviously, any technology developed in the JMR competition could be applied to a civil variant.

As most military programs, the JMR evaluation (and possible production of the winning design) face a major threat; the 2011 Budget Control Act, or the “sequestration act.” It calls for a reduction of $1 trillion in the federal budget over a decade. It could delay the start of new military programs and drastically reduce programs currently in production. It could result in the extension of the service life of current military aircraft by means of major overhauls, life-extension modifications and updates of on-board equipment.

There is no lack of new equipment to further expand the versatility of the helicopter. For example, in May, Sikorsky received FAA approval for its new “Rig Approach” system which allows virtually “hands-off” approach to off-shore drill rigs. Basically an improved search and rescue system, already installed on SAR versions of the S-92, it allows pilots to land on rigs in weather that would have forced them to abort a landing before the Rig Approach system was available. Other applications are being studied.

Another technology with great potential is the Health and Usage Monitoring System, or HUMS. Imagine dozens of tiny sensors monitoring temperatures, vibrations and pressures in the critical parts of a helicopter. As the helicopter flies, this data is being collected and transmitted by radio to a central analysis center at Sikorsky Aerospace Services. There, the data is analyzed; any discrepancy is immediately relayed to the operator of the helicopter. Although fairly young, it has allowed increases in TBO’s on major components. The concept is accepted by the FAA and may prove to be a major breakthrough in helicopter operations (and costs) as it matures in the future.

Law enforcement agencies, as well as the armed forces, are sponsoring research and preliminary production of a variety of small unmanned helicopters. The helicopters carry sensors and cameras and can operate around the clock. In size, they range from that of a small bird to highly-modified MD-500 and Bell Jet Ranger helicopters, Kaman’s K-Max and recently, the Sikorsky S-76 and UH-60 Blackhawk. The K-Max has already flown unmanned resupply missions for the Marines in Afghanistan and earned high praise for its pioneering work. Though much of this work is still highly classified, there is no doubt that autonomous, remotely-controlled helicopters are rapidly growing in importance.

Considerable research is focused on eventually providing these helicopters with the capability of navigating in mountainous terrain, avoiding high ground, and landing in a designated area, without a pilot on board. If this sounds impossible, this writer suggests that the capabilities of today’s smartphone would have been considered impossible thirty years ago. The simple cell phone of yesterday has evolved into a mobile electronic communication center with a web browser, GPS tracker, camera and new capabilities being added on a monthly basis. In large part, this is due to the rapid advances in the science of nanotechnology, which is going to be a game-changer in engineering and electronics. It allows scientists to work and build parts at the level of molecules and atoms. It will, eventually, be used to create computers far smaller but much more capable than anything available today. Additionally, this will allow cameras and sensors to shrink in size and weight, while growing in range and precision.

Though research funds may shrink, and production runs may shrink as well, there is every reason to believe that the basic helicopter has proven its worth. It is the writer’s personal opinion that the helicopter will continue its steady development. It has established itself both militarily and commercially. It is growing in versatility. New technologies promise new missions, new capabilities that will prove the wisdom of Igor Sikorsky’s words that “… the helicopter will do a number of jobs that no other machine can do … except another helicopter.”