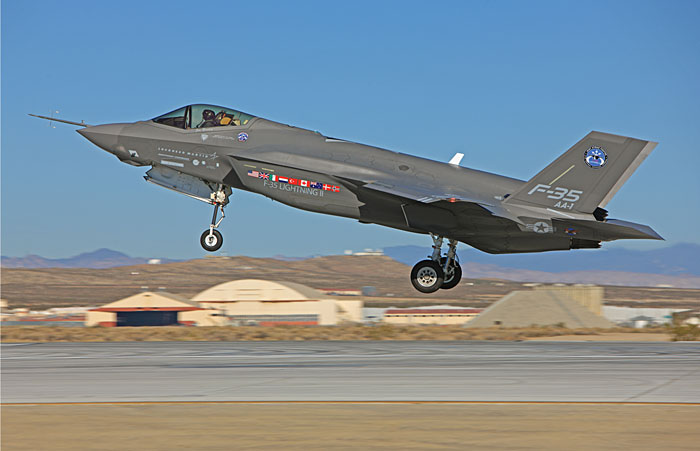 When the 100th F-35 Lightning II Joint Strike Fighter was delivered, it was a “big deal for the Air Force,” said chief of staff Gen. Mark Welsh.

Welsh is the most visible face and the strongest voice supporting the F-35. A respected fighter pilot, Welsh is trying to steer his service at a time when funding is sparse and other options for the future of long-range, land-based air power aren’t included in current policy. Welsh consistently rejects critics who argue that new-build or upgraded versions of the F-15 Eagle, F-16 Fighting Falcon and F/A-18 Super Hornet would make better economic sense than the F-35, which is the product of the costliest military acquisition in world history.

That may put Welsh at odds with Navy Capt. Francis Morley, program manager for the F/A-18, who told reports in December that the Super Hornet is a “no drama option.” Some say the F-35 program has produced more drama than results.

Welsh told reporters, “I am certainly not willing to go to my secretary or the secretary of defense or to the chairman [of the Joint Chiefs of Staff] and say, ‘I would recommend that we keep our old equipment and update it, and just accept more losses and count on the incredible ability of our aviators to win the fight anyway.’”

Welsh drank the Kool-Aid — Air Force talk for buying the official line — about the notion that fighters exist in generations and that the Air Force needs a “fifth-generation” fighter that employs stealth. Critics say the idea was a marketing tool devised by a plane maker and is meaningless: They argue that stealth is not important in modern warfare and that an F-35, just because it is newer, is not necessarily going to defeat a Gripen, a Typhoon, a Sukhoi Su-35, or an F-15SE Silent Eagle.

To the ordinary citizen, or even to an aviation insider who grew up in the ways of Washington, it’s difficult to reconcile the differing opinions of those who love the F-35 and those who criticize it. The bottom line, perhaps, is the question of how long we taxpayers ought, reasonably, to wait for the F-35 to demonstrate that it really is dual-role (air-to-air and air-to-surface), that it really is superior to even the most advanced of existing fighters, and that it will end up being worth the very high price the nation is paying for it.

Under development are three versions, the conventional landing and takeoff (CTOL) F-35A for the Air Force and most overseas users, the short takeoff and landing (STOVL) F-35B for the Marine Corps, Britain and Italy, and the carrier-based F-35C for the Navy. The F-35B uses a lift-fan for vertical flight not found on other models. The F-35C is larger and heavier than the others and carries more fuel.

This aviation insider uses dumb math. Take the total amount to be spent, $392 billion. Divide the total by the number of planes to be bought (2,443 including 1,763 for the Air Force). The solution is $160 million per airplane.

This is more than double the $75 million, as measured in 2013 dollars, quoted as the sticker price by Lorraine Martin, head of the F-35 program at Lockheed in a December statement. Note that both figures use calculations based on future events. Winslow Wheeler, analyst at the Project on Government Oversight, told Flight Journal that the planemaker’s figure is “absurd” and that F-35s being purchased in fiscal year 2014 will average $185 million each, with Navy F-35Cs costing $264 million each. “The actual cost of the F-35 in future years will become multiples of what its advocates have been saying,” Wheeler told this magazine.

By any measure, the F-35 costs more than any other fighter worldwide save the F-22 Raptor, which was purchased on a small scale (187 aircraft) over many years.

The F-35 is a straightforward, tricycle-gear, twin-fin, single-engine fighter powered by a 28,000-pound thrust Pratt & Whitney afterburning F135-PW-100 two-stage turbofan engine. It has a 35-foot trapezoidal mid-wing (43 feet on the carrier-based F-35C) with a leading edge swept back at 33 degrees. It uses stealth coating to make it difficult to detect on radar. It may be difficult to see coming but it’s easy to hear: a study at Eglin Air Force Base, Florida, where the 33rd Fighter Wing is training F-35 pilots, found the single-engine F-35A to be twice as loud as the twin-engine F-15C Eagle.

The pilot sits on a Martin Baker UF-16B version of the Mk. 16 ejection seat, a derivative of the seat employed on the Eurofighter Typhoon seat, rather than the ACES II model that is standard elsewhere in the U.S. military. The pilot uses a sidestick controller, like the one on the F-16, rather than a control stick.

The F-35A is supposed to be armed with an internal GAU-22/A four-barrel rotary 25-mm. cannon with a skimpy 182 rounds. The gun on the F-35B and F-35C is carried in an external pod — undermining the stealth properties that are the planes’ principal selling point. In a January 6 interview, Col. Stephen “Jester” Jost of the 33rd wing told this magazine the gun is currently “not an authorized weapon.” Developmental work on the gun has been stalled by technical glitches. Past attempts to develop a new cannon to replace the proven, Vietnam-era M61A2 Vulcan 20-mm weapon have not succeeded.

Carrying bombs or fuel tanks externally is another way to undermine stealth, so the F-35 has an internal weapons bay, much like a World War II bomber.

From its inception as a technology demonstrator program in 1989, the F-35 has always been intended to carry both conventional and nuclear munitions. In January, Welsh’s predecessor, retired Gen. Norton Schwartz said the Pentagon should abandon its $350 million program to make the B61 hydrogen bomb compatible with the F-35. Funding to make the F-35 nuclear-capable should be diverted to a new bomber, Schwartz said.

Alone among fighters worldwide, the F-35 does not have a head-up display to enable the pilot to look out from the aircraft instead of down at the instrument panel. Instead, the aircraft relies on a helmet-mounted display system. In addition to allowing the pilot to keep his head up and see around the aircraft through external cameras, the binocular helmet display is designed to dispense with a need for separate night-vision goggles. Two years ago, Lockheed reported it was making progress fixing three problems with the display — impeded night-vision, latency, and jitter problems. More recently, plans for an alternate helmet display were dropped. An eventual improvement to the current helmet display will include new liquid crystal displays and software enhancements.

The F-35 program is moving ahead under an arrangement called “concurrency,” in which the aircraft begins flight operations while undergoing tests. The 33rd wing at Eglin has begun training F-35 pilots, about four years later than planned.  The 56th Fighter Wing at Luke Air Force Base, Arizona, was scheduled to receive its first F-35 in March 2014, to begin its role as the second Air Force Lightning II training base. But a Pentagon report released January 23 said that concurrency isn’t working, that F-35 software is not yet mature enough for operations. In the report, the Pentagon’s chief weapons tester, Michael Gilmore, called performance of the plane’s software “unacceptable.” The report said the F-35 is proving less reliable and harder to maintain than expected, and remains vulnerable to propellant fires sparked by missile strikes.

But let’s not kid ourselves. As of now, the F-35 is limited to day flying under visual flight rules. The software isn’t ready for an operational environment. The cannon doesn’t work. The helmet display still has problems. The tailhook on the Navy version still has problems. And no matter how you finesse it, a single F-35 costs at least twice as much as an advanced F-15, F-16 or F/A-18.

My opinion is that the F-35 has had its chance and we need to explore other options.