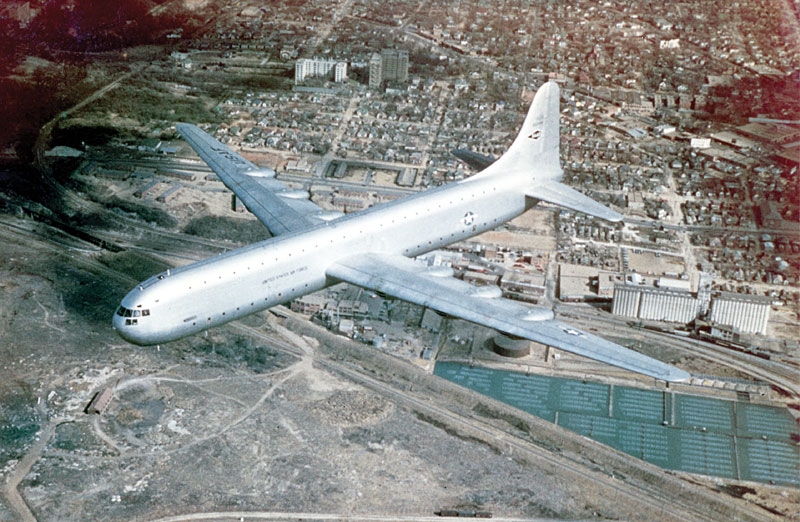 Big, historic airplanes could be the aeronautical definition of “conundrum” for museum people. No one wants to see a truly historic airplane, such as the XC-99 disintegrate into powdery oxide while in outside storage. However, the realities of space and financing determine the prioritization for every museum of any size: some aircraft are just not likely to be saved. The tale of the XC-99 is long and arduous and, unfortunately, typical of what faces many, big airplanes.

The term “magnesium overcast” seems to fit the XC-99, the colossal, one-of-a-kind cargo version of the B-36 bomber.

The six-engined, 265,000-pound XC-99 made extensive use of the tricky, flammable metal. It was big enough, with its 230-foot wingspan, to come close to blotting out the sun. Today, efforts to preserve and display the XC-99 appear to be at a hiatus. At the request of Flight Journal, retired Lieutenant General Jack Hudson, director of the National Museum of the United States Air Force in Dayton, Ohio, issued this statement:

“The staff of the NMUSAF has determined that our current restoration and exhibit resources and manpower must be redirected and focused to meet our critical near term requirements of enhancing current public galleries, such as Cold War, as well as preparing for our new fourth building and its four additional galleries. These near term requirements, along with the budget and manpower reductions, will not allow for the needed care, attention, and restoration of the XC-99 in the foreseeable future.”

The mortal remains of the XC-99, moved from San Antonio, Texas, to Dayton at huge difficulty a decade ago, was moved again to the boneyard in Arizona. The villain: ongoing federal budget squeeze.

Designed in 1942, the XC-99 had a spacious, double-deck interior designed to carry 400 combat troops or 101,000 pounds of cargo. The XC-99 was powered by six 28-cylinder Pratt & Whitney R-4360-35 radial engines rated at 3,000hp each. It was the largest aircraft in the world in the 1950s and remains the largest propeller-driven aircraft ever built.

Testing began on November 23, 1947. The XC-99 entered service two years later. It was stationed from 1949 to 1957 at Kelly Air Force Base, Texas. In 1951 and 1952, the plane carried seven million pounds of equipment and supplies supporting the Korean War effort.

As a teenager, I had a memorable tour of the XC-99 when it visited Bolling Air Force Base in Washington, DC in May 1954.

The tabloid Washington Daily News published an air-to-air, black and white photo of the XC-99 arriving for the Armed Forces Day show at Bolling. Visible in the photo were Fort McNair and Bolling, with its busy runways and ramp, as well as the engine nacelle of the TB-25N Mitchell carrying the photographer. I wrote to the paper requesting an 8 by 10 print. The Daily News wrote back and said I’d have to send them a dollar. I did. The paper went out of business soon afterward so mine may be the only copy of this portrait of a flying behemoth.

People gawked whenever the XC-99 appeared at an air show. At one event, when it was still an operational aircraft, a woman asked pilot Captain Jim C. Douglas, “How will you move this thing from here?”

Douglas replied, “We fly it, lady.” The woman retorted, “Young man, what kind of a fool do you take me for?” By 1957, the condition of the six-engined XC-99 was such that $1 million in immediate maintenance would have been needed to keep it aloft. The big plane was always difficult to load, lacking the “roll on, roll off” capability of today’s airlifters, Repairs were deemed uneconomical. The Air Force withdrew the plane from service.

Thereafter, the XC-99 had several owners until 1993 when the Kelly Heritage Foundation acquired it and towed it back onto the base. “We were about to renovate the XC-99 when Kelly was placed on the closure list by the 1995 Defense Base Closure and Realignment Commission,” said Duane Simpkins of the foundation in a 1998 interview. The foundation has not updated its web site for several years and did not respond to an FJ inquiry. Also in 1998, retired Major General Charles Metcalf, then director of the Air Force Museum (now the NMUSAF) told me he hoped the XC-99 could be saved but was “pretty pessimistic.”

The condition of the aircraft had deteriorated badly, in part because magnesium does not hold up under the elements.

That year, some of the XC-99 was in the museum’s restoration hangar, but most of it was in San Antonio awaiting movement. Museum spokesman Robert J. Bardua said restorers had the leading and trailing edges of the wings, wingtips, horizontal and vertical stabilizers, flight controls, tail section, engines and propellers. The rest would come later, Bardua said.

Among XC-99 buffs, two myths have taken hold. The first is that the Air Force missed an opportunity to fly the plane to its museum in Dayton in 1957 for the price of fuel. The second myth is that, today, nobody in the Air Force cares. A flight to Dayton was nixed in 1957 because the cost of making the XC-99 airworthy for a one-time trip was prohibitive. Many with an interest in the aircraft worked to save it. I published an opinion piece in the trade journal Air Force Times in 1998. With enormous effort and expenditure, the XC-99 — in derelict condition — travelled by land from San Antonio to Dayton. Efforts to restore it moved in fits and starts.

It was always a challenge, in both technical and fiscal terms, The April 3 statement — gotten for us by Bardua, who is on the job 16 years later— confirms that this is the wrong budgetary era for a challenge of this magnitude.

Curiously, no one seems to have considered an obvious alternative — the Air Mobility Command Museum at Dover Air Force Base, Delaware. When I visited Dover recently, AMC Museum director Mike Leister had not heard that plans to restore the XC-99 in Dayton had been dropped.

Leister told me his museum would face the same challenges as the NMUSAF, He does not have funds to move the XC-99 from Dayton to Dover and would want to be better informed before working with magnesium. But Leister said he has the space, the expertise, and the volunteers to restore the XC-99. He and his staff restore large aircraft constantly. They currently display the only C-5 Galaxy on exhibit for the general public.

To me, the situation is déjà vu. I had a small role in preventing the XC-99 from rotting in San Antonio. By all accounts, it is too late now to prevent it from being placed in storage in Arizona. As a longtime supporter of the AMC Museum in Dover, I would love it if the XC-99 could be moved there, but grim realism tells me it isn’t going to happen.

The NMUSAF statement concludes: “As this aircraft is important to the NMUSAF collection and we do have concerns regarding its continued storage in the harsh Ohio climate. [Moving the aircraft to Arizona] will provide the best possible security and storage conditions until such time as final long term plans might be completed.”

It’s impossible not to think of other examples of heavy iron that should have been preserved but weren’t — the Junkers Ju 290 scrapped at Wright Field in 1947 (captured after World War II and brought here), the Lockheed R6O-1 Constitution (two built) and the Douglas C-74 Globemaster (14 built).

These aircraft would make eye-watering, educational displays and we’ve lost all of them. The combination of lack of interest, costs, and space worked against them. It’s a process that repeats itself entirely too often.

The jury is still out on the XC-99, but all signs suggest we’ll lose it too.