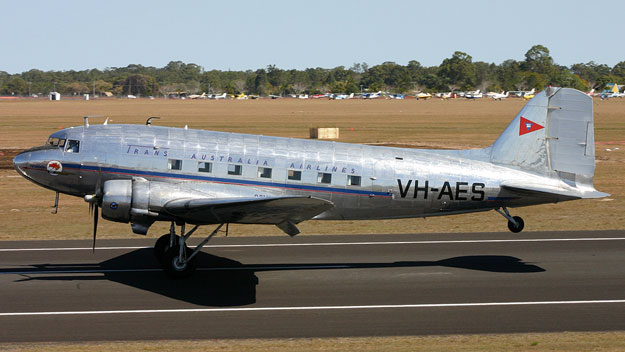 A piece of Australia’s aviation history flew into Warrnambool, Victoria, Monday carrying descendents of the first chairman of Trans Australia Airlines (TAA) onboard.

The flight of the heritage Douglas DC-3 airliner (VH-AES “Hawdon”) was to include Nancy Duncan, who was 22 when the plane first travelled from Melbourne to Sydney with 24 passengers more than 66 years ago, but poor health meant she was unable to attend.

Duncan is the daughter of TAA’s first chairman, Sir Arthur Coles. Speaking via telephone, Duncan said it was “truly wonderful” the vintage aircraft was still airworthy.

“I’ve travelled there in my mind but my body won’t let me be there,” she said. “It’s wonderful, there are so many memories.”

Instead, about 20 members of the Coles family flew return from Melbourne, including sixteen-year-old James Coles who was inspired by his great-grandfather  John Coles, who was 13 when he flew with his sister Nancy.

For the complete story by Clare Quirk of The (Warrnambool) Standard, click here.