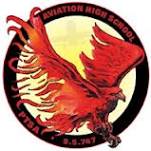 Seattle’s Raisbeck Aviation High School (RAHS), in collaboration with The Museum of Flight and Highline Public Schools, is celebrating the grand opening of its new campus on the grounds of The Museum of Flight. To kick off the event, a specially-themed Alaska Airlines Boeing 737-900ER will deliver students and guests to The Museum of Flight, where they will be greeted by classmates, parents, industry partners and elected officials.

Joining students on the flight will be Washington Gov. Jay Inslee and internationally-acclaimed engineer James Raisbeck, for whom the school is named. In addition to Gov. Inslee, Congressional members Sen. Patty Murray and Rep. Adam Smith will be in attendance.

After the plane lands, the group will move to the new school for a program showcasing both the significance of the RAHS model in public education and the unique private-public partnership that helped build the state-of-the-art learning facility. Tours of the new facility will take place throughout the afternoon.

The only high school originally selected as a model for Washington’s STEM Lighthouse Program, Raisbeck Aviation High School has already established itself as a statewide leader in science, technology, engineering and math (STEM) education. With the opening of its new facility at The Museum of Flight, RAHS is now the only aviation-themed college preparatory school in the country to share resources with an aerospace museum. The school’s proximity to The Museum of Flight and the nearly 200 aviation-related businesses that surround Boeing Field affords students the opportunity to be inspired and informed by the region’s aerospace leaders. Students are already taking advantage of the myriad unique opportunities available to them at the school’s new facility, as Raisbeck Aviation High School opened its doors for the first day of classes Monday, Sept. 9.

The Museum of Flight serves more than 150,000 students each year through a series of different educational programs and welcomes the opportunity to share our region’s strong tradition of aerospace ingenuity with RAHS students.

From a news release