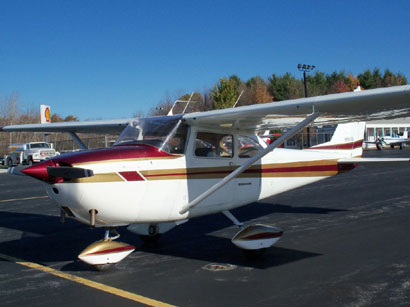 WinnAero, a non-profit aviation education group in Gilford, N.H., is giving away a 1966 Cessna 172G four-place aircraft plus $1,200 in cash during the group’s fundraiser raffle drawing at the Laconia Airport Terminal this Saturday.  The ceremony will start at noon with the actual drawing at 1 p.m.

Retired U.S. Air Force Col. Bob Fortnam of Pembroke, N.H., will have the honor of drawing the winning ticket. Col. Fortnam was a bomber pilot during World War II and his story is inspirational. Still actively flying today on a weekly basis at age 89, Col. Fortnam was the World War II co-pilot of a bomber which sustained major battle damage. With the aircraft commander incapacitated with a stomach wound, Col. Fortnam took command and attempted to bring the crippled bomber home to its base in England.

Unable to make it due to damage, Col. Fortnam successfully brought the aircraft down in a crash landing in then occupied Holland. Captured by the Germans, he and his crew, including the wounded aircraft commander, survived 19 months as POWs before returning to the States.

For the complete story in the Laconia Daily Sun, click here.