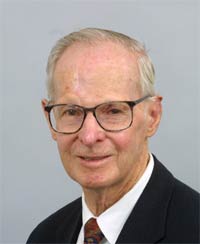 Dr. Paul MacCready, internationally renowned innovator and entrepreneur, founder and former chairman of the board of directors of AeroVironment, Inc., passed away in his sleep on Tuesday, August 28. Dr. MacCready had recently been diagnosed with a serious ailment. His passing occurred less than one week after the 30th anniversary of one of his most notable accomplishments, the record-setting flight of his human powered airplane, the Gossamer Condor.

ìThe world has lost a man of unique vision, and the people of AV have lost a mentor and friend,î said Tim Conver, AeroVironmentís chairman, chief executive officer and president. ìPaul was an inspiration to so many people around the globe who were touched by his accomplishments and his innovative approach of ëdoing more with much lessí.î

Born in 1925, Paul MacCready founded AeroVironment in 1971 and this month celebrated the 30th anniversary of the record-setting flight of the Gossamer Condor, which made the worldís first sustained, controlled flight powered solely by a human on August 23, 1977. The feat led to Dr. MacCready being nicknamed the ìfather of human-powered flight.î

Dr. MacCready was named Engineer of the Century by the American Society of Mechanical Engineers and selected Graduate of the Decade by the California Institute of Technology. He was named one of the 100 greatest minds of the 20th century by Time Magazine. In recent talks and presentations around the world he would typically leave his audiences with the following thought, reflecting his focus on the changing relationship between humans, nature and technology:

ìOver billions of years, on a unique sphere, chance has painted a thin covering of life — complex, improbable, wonderful and fragile. Suddenly we humans (a recently arrived species no longer subject to the checks and balances inherent in nature), have grown in population, technology, and intelligence to a position of terrible power: we now wield the paintbrush.î