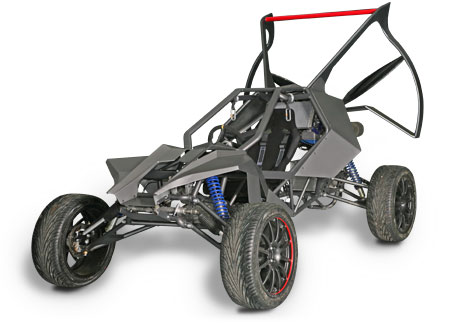 Has the “flying car” finally gotten off the ground? Sales for an innovative vehicle called the SkyRunner began today with its public debut at the Fort Lauderdale International Boat Show in Florida.

More of a beefed-up paraplane than a roadable aircraft like the Terrafugia Transition, the SkyRunner is a single-seat all-terrain-vehicle with a rear-mounted propeller that attaches to a fabric reflex paraglider wing to enable flight. It’s powered on the ground and in the air by the 1.0-liter three-cylinder turbocharged motor from the Ford Fiesta subcompact car.

According to its designers, it can go 115 mph on the ground, where it gets 53 mpg, and 55 mph in the air with a range of 200 nautical miles. Its maximum altitude is 15,000 feet, but FAA rules restrict its operation to 10,000 feet. All that’s needed to operate it is a sport pilot’s license, which can be earned with just 12 hours of lessons. As with most paragliders, it doesn’t require an airport and can take off and land from just about any open stretch of ground, including the beach.