On the southwest corner of Falcon Field Airport in Mesa, Arizona, are the 55,000-square-foot hangars of the Arizona Commemorative Air Force Museum (AZCAF). As part of the museum established in Texas, this museum was started in 1977, with the restoration of a B-17G Fortress named “Sentimental Journey.”

Despite the vintage aircraft behind a chain-link fence, and looking at the hangars, one does not receive the feeling this is an aircraft museum for to the left of the entrance is a 30mm anti-aircraft flak gun from the warship, U.S.S. Guam. But once you enter there is no doubt in your mind that this indeed is an aircraft museum. Before you is the gift shop stocked with clothes and memorabilia, with each item printed with images of aircraft. It is here you pay the admission fee and where a friendly volunteer gives a general layout before escorting you to the hangar entrance. 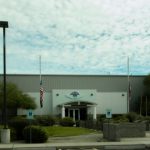 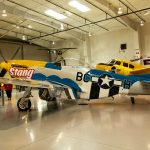 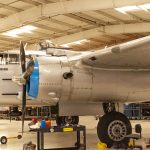 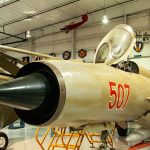 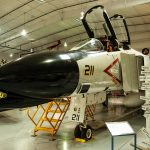 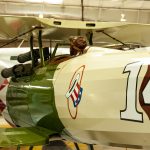 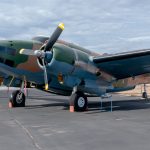 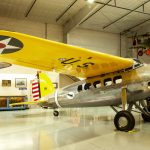 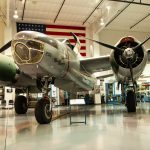 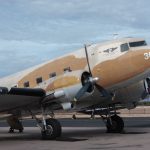 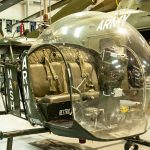 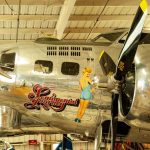 Once the door opens, at first the displays seem overwhelming with both static displays on the floor and also, hanging above you. You are first greeted to the left with a Stinson L-5E, and to the right, an F-4N Phantom II. But do not worry, the layout is simple even to the non-aviation enthusiast. Heading in a counter-clockwise direction and bearing in mind the numerous safety signs reminding you to be aware of the sharp edges, the exhibition of aircraft begins with the Asian theater to the early stages of aircraft.

The aforementioned F-4 is followed by a MIG-15bis from the Hungarian Air Force. Then it is on to a pair of helicopters from the Korean War, a Bell OH-BT-13/47 most famously known from the long running hit television series, “MASH,” and a Sikorsky CH- H25/S55 Chicksaw.  From there, a North American B-25 Mitchell and a P-51D Mustang, lead to the early days of flying including a Lockheed Vega DL1, and then back to the Stinson. And don’t forget to stop and look up for there are more replica models hanging from the ceiling.

Impressive is that each aircraft has large signage and a display showing not only the specifications of the aircraft but also in some cases, the history of the restoration and the aircraft’s current owner. There are also extensive informative exhibits that contain models and videos such as Tuskegee Airmen, Women in Aviation and, numerous displays of aircraft engines. Along with access to peer into the cockpits of some of the planes, what at first may be a 30-minute tour, took almost an hour. And yet, this was only the appetizer if you will, for this was only one hangar.

Heading through another set of doors which takes you down a short hallway past more exhibits and a small classroom for guest lecturers, leads into the second hangar, which is also known as the maintenance hangar. It is here where flying warbirds that are used for rides for an additional charge are maintained. Though the area is blocked off, you can be escorted to tour the inside of these aircraft. It is also here where the crown jewel, the B-17 “Sentimental Journey” sat with its bomb bay doors open. A volunteer meticulously repaired the painting on the SNJ T-6 Texan, while another North American B-25 Mitchell, “Made in the Shade,” and an Aeronca  L-16 Grasshopper, rested and waited their turn.

Another side door then leads to the aircraft sitting outside and a full view of Falcon Field’s runways 22R and 22L. Before you, sits a Douglas C-47 Skytrain Dakota in flying condition as a corporate aircraft while waiting for funds to restore it to its awarded WW II past as “Old Number 30.” Behind also stand a sun faded Vulture BT-8 and a Douglas A/B 26C Invader. But do not forget to pay attention to the airport’s ongoings. You just might see an AH-64 Apache helicopter flying for across the field is Boeing’s Mesa factory for the military gunship.

The AZCAF museum is worth the 30-minute drive from Phoenix’s Sky Harbor Airport, just as long as you do not plan a quick jaunt. Plan at least a half day to absorb and appreciate the role these historical planes played not only in military history, but as well as aviation history in general.