April 25, 1945: First Lieutenant Raymond L. Knight in the northern Po Valley, Italy, piloted a fighter-bomber aircraft in a series of low-level strafing missions, destroying 14 grounded enemy aircraft and leading attacks which wrecked 10 others during a critical period of the Allied drive in northern Italy. On the morning of 24 April, he volunteered to lead two other aircraft against the strongly defended enemy airdrome at Ghedi. 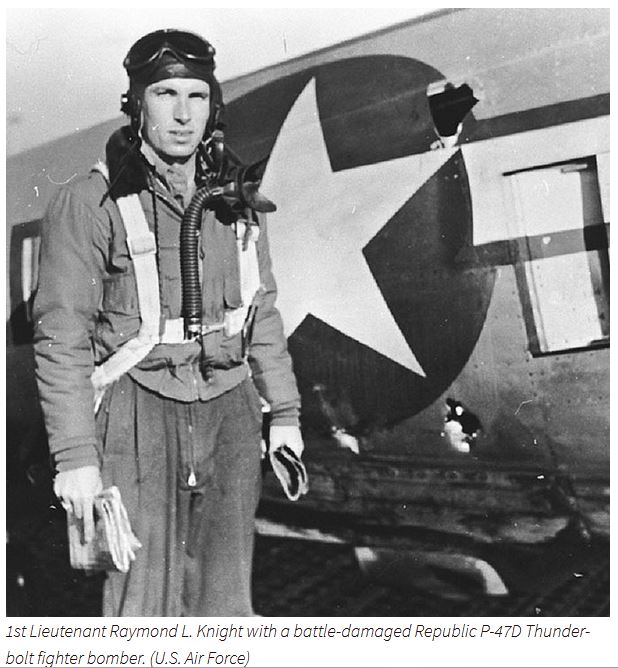 Ordering his fellow pilots to remain aloft, he skimmed the ground through a deadly curtain of antiaircraft fire to reconnoiter the field, locating eight German aircraft hidden beneath heavy camouflage. He rejoined his flight, briefed them by radio, and then led them with consummate skill through the hail of enemy fire in a low-level attack, destroying five aircraft, while his flight accounted for two others. Returning to his base, he volunteered to lead three other aircraft in reconnaissance of Bergamo Airfield, an enemy base near Ghedi and one known to be equally well defended. Again ordering his flight to remain out of range of antiaircraft fire, Lieutenant Knight flew through an exceptionally intense barrage, which heavily damaged his Thunderbolt, to observe the field at minimum altitude. 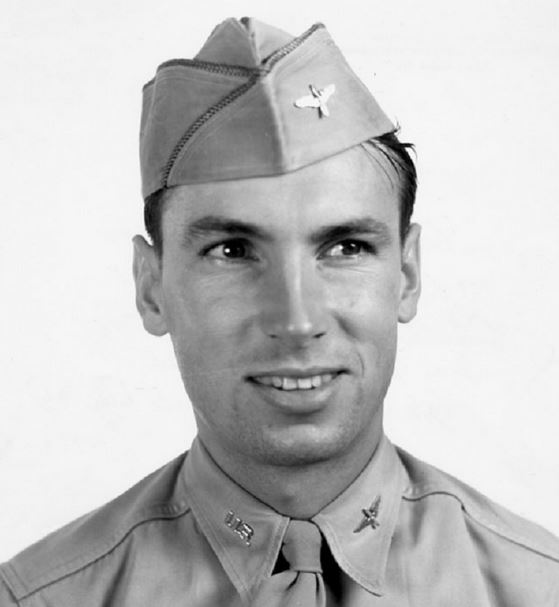 He discovered a squadron of enemy aircraft under heavy camouflage and led his flight to the assault. Returning alone after this strafing, he made 10 deliberate passes against the field despite being hit twice more by antiaircraft fire, destroying six fully loaded enemy twin-engine aircraft and two fighters. His skillfully led attack enabled his flight to destroy four other twin-engine aircraft and a fighter airplane. He then returned to his base in his seriously damaged airplane. Early the next morning, when he again attacked Bergamo, he sighted an enemy plane on the runway. Again he led three other American pilots in a blistering low-level sweep through vicious antiaircraft fire that damaged his airplane so severely that it was virtually non-flyable. Three of the few remaining enemy twin-engine aircraft at that base were destroyed. Realizing the critical need for aircraft in his unit, he declined to parachute to safety over friendly territory and unhesitatingly attempted to return his shattered airplane to his home field. With great skill and strength, he flew homeward until caught by treacherous air conditions in the Apennine Mountains, where he crashed and was killed. 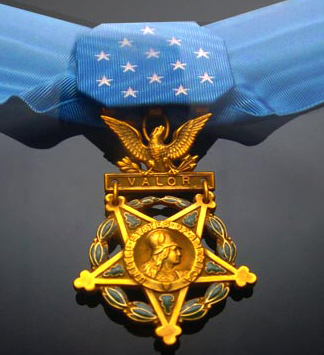 The gallant action of Lieutenant Knight eliminated the German aircraft which were poised to wreak havoc on Allied forces pressing to establish the first firm bridgehead across the Po River. His fearless daring and voluntary self-sacrifice averted possible heavy casualties among ground forces and the resultant slowing of the drive which culminated in the collapse of German resistance in Italy.

Lieutenant Knight flew 82 combat missions. He is credited with 14 enemy aircraft destroyed. The Medal of Honor was presented to Mrs. Knight by Major General James Pratt Hodges at a ceremony at John H. Reagan Senior High School, 23 October 1945. In addition to the Medal of Honor, Lieutenant Knight was also awarded the Distinguished Flying Cross, and the Air Medal with five oak leaf clusters (six awards).