I am a volunteer at my local historical society in Sunnyvale, California. When the Covid-19 pandemic began, I started to research the spread and impact of the Spanish flu 100 years prior. I began looking through the local paper, the Sunnyvale Standard from 1916, starting earlier so that I could find the first mention in an article. As I was reviewing the reels of weekly editions, I came across an interesting article on a completely different subject:

So many questions came to mind: Who or what was the Andermat Aeroplane Company? If they had received such a huge contract, why weren’t they more well-known in aviation history? Where was the plant located? What did the planes look like? Were they used in the War?

What, where, and who

Checking an inflation calculator, $9 million in 1916 is $224,540,388 in 2020, which is indeed “colossal”. Just to give an example of salaries at the time, according to the Bureau of Labor Statistics, the average household in 1915 earned $1,518 a year. A business in a small town getting a contract for $9 million at that time is fantastical. It’s almost unimaginable. The Sunnyvale Standard also reported that it was, “the largest single contact of any kind that has been let in this country since the war in Europe began.”

Doing an internet search for “Andermat Aeroplane” yielded at first, a few grainy photos from a Russian war plane enthusiast website, and the description was of the “Andermat Bomber”. That was interesting, but since this was during the WWI era, not too unexpected. Even though according to the Sunnyvale Standard article, the contract was about to be signed to produce “300 machines”, I could only find a few low-quality images of a single aircraft.

My next question was where would they be produced? In a follow up article printed a week later, “the Goldy Plant” was mentioned as the planned assembly location, which had already been used to build the first Andermat Aeroplane. The Goldy Plant was located in Sunnyvale on the San Francisco – San Jose railroad line, close to Joshua Hendy Iron Works (1856 to 1947), which was at one time a world leader in mining technology and later contributed to the shipbuilding industry during WW II.

Back to the question of who or what was Andermat, I found on the German version of Wikipedia, an article about the Andermat Machine Company (no information in the US version–just a tag for “Andermat 1916 Biplane”, but no article). In the German article, it reads that Andermat was the creation of Gilbert M. Anderson and Robert P. Matches who were partners for several years on their Gray Taxicab Company, where they ran taxis in Los Angeles and San Francisco. In 1915 they formed a new vehicle production company, and used a combination of their surnames to call it Andermat (ANDERson MATches).

A May 8, 1916 article from the Aerial Age Weekly reported the test flight:

Roy Francis, the San Francisco aviator, piloted the huge craft; which has a wing spread of seventy-two feet, across a mile-wide field, made a short turn and landed within only a few feet of the starting point. At no time was Francis more than fifty feet above the ground, but the flight was termed remarkably successful because of the size of the craft

The machine is equipped to carry three persons, including the pilot in an inclosed body from which bombs could be dropped. It has a carrying capacity of 800 pounds useful load, such as ammunition and provisions. The wings of the cruiser spread seventy-two feet and it measures forty feet from the nose to tip of tail. It weighs approximately a ton and a half and is propelled by two Andermat twin four V-shaped engines, which develop 120 horsepower each. The total carrying capacity of the cruiser while in the air, including the useful load, is 2,275 pounds.

The Andermat people believe that they have the ideal machine for the Alaska mail service.

There’s a bit of confusion regarding the purpose of the plane when there is mention of the possibility of dropping bombs, but also mention of the Alaska mail service. Another snippet of information from the San Francisco Chronicle from May 28, 1916 provides another clue of intent:

Mr. and Mrs. Robert P. Matches of San Francisco are at the Hotel Astor for a visit of a month. Matches is president of the Andermat Aeroplane Company ot Sunnyvale. Ca. and is in the East to look after Government contracts which his company is filling.

How is it that the Chronicle would have such personal business information?!! Mrs. Matches lived at the Hotel Astor for a month while her husband went to Washington DC to look for a contract to provide planes for the US military. Two weeks later, the article in the Sunnyvale Standard appeared, announcing the $9 million dollar contract.

What happened? Why wasn’t the contract fulfilled? Why were the partners, Gilbert Anderson and Robert Matches, unable to build any planes, other than their single prototype?

Here’s the short answer in case you want to cut to the chase: Robert Matches was a profiteer who was constantly looking for ways to make big money, within short periods of time. The Andermat Aeroplane was an idea that he was able to monetize (he didn’t have a special affinity for planes), but then dumped the project a few months after the test flight, by leaving California for New York with $18,000 (roughly $450,000 today) missing from the company’s accounting book, to start something new. Gilbert Anderson was gobsmacked; he never saw it coming. Since Anderson was the principal investor, he took the financial hit and never recovered the business.

Unfulfilled dreams at the Goldy Plant

Gilbert Anderson and Robert Matches were business partners, jockeying to dominate a huge market share for jitneys and taxicabs. In 1912, they started the Gray Taxi Company, and with the offerings of low rates, quick service, and uniformed drivers, Gray taxis (they really were gray) quickly took over the market in Los Angeles and San Francisco.

Gilbert Anderson was the principal stockholder of the Gray Taxicab Company, while Robert Matches was president and general manager. By 1913, the Gray Taxicab company secured exclusive taxicab rights for the entire California south coast. No other company or individual was allowed to solicit a taxicab business at any station or depot.

Having secured this grant, the Gray Taxicab Company purchased the Goldy Plant in Sunnyvale in December 1913 with the intention of producing seven or eight cars a day, with 200 employees. The Goldy Plant was made up of two large buildings, a foundry, a boiler room, and several smaller buildings, all on 20 acres along the Southern Pacific railroad line, close to Murphy Avenue and Hendy Iron Works. The purchase in 1913 was valued at $60,000, which is approximately $1.56 million today.

No cars were built at the Goldy Plant and the reasons are unknown. However, what is known is that Robert Matches was fascinated with transportation, connected to the idea of profit from marketing and selling vehicles of transportation. He was instrumental in making Gray Taxicab a success, and then used income from the taxicab business to invest in other ventures, such as the hydro-motor amphibian-car project, built in San Francisco, and the Andermat aeroplane in Sunnyvale.

The Andermat aeroplane was built in the Goldy Plant, starting in mid-1915, and took approximately eight months to build. The first test flights took place on an airfield, otherwise  referred to as “mud flats”, located in the northern part of Sunnyvale.

The main test flight took place on April 17, 1916 in the presence of a representative from the US War Department. The flight was deemed a success, and the Andermat aeroplane was shipped, through Los Angeles, to North Island in San Diego, for another test flight. From San Diego, the plane was sent to another testing facility at Kelley Fields in San Antonio, Texas.

After the plane was returned to Sunnyvale, little is known about what happened to it or the location of its final resting place. I was able to track down a few more photos of a significantly altered plane, but without understanding the purpose of the modifications, it’s difficult to speculate what had been the plan and how it went wrong. 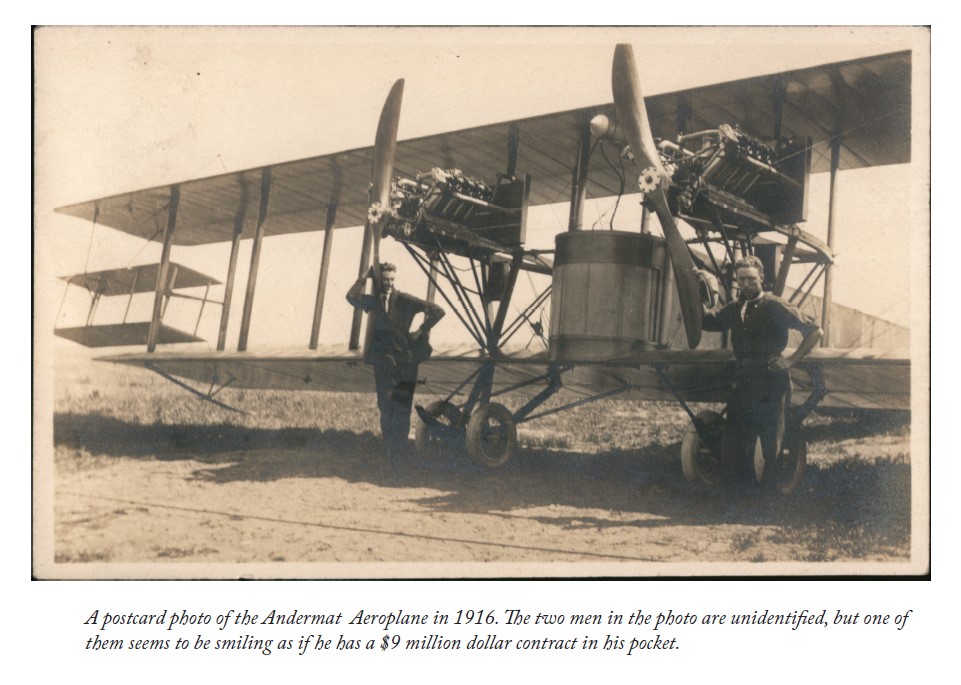 A bit more about “Ander” and “Mat”

The story of Robert P. Matches can be traced quite clearly through newspapers across the country, from 1915 to the early 1920s. In addition to poor financing practices with the Gray Taxicab Company, he was accused of speculating and selling worthless stock for another of his businesses, the Emerson Car Company. He was eventually indicted.

It was much more challenging to find information on Gilbert M. Anderson of Andermat, because another Gilbert M. Anderson kept dominating my search. Gilbert M. Anderson, the silent movie actor who had his own successful film studio in Niles, California, became world famous for his role as “Broncho Billy”, starting in 1908. Today he is recognized as the first star of the “western” film genre.

In 1915, the year before the Andermat plane was created, Gilbert Anderson’s film company called Essanay, which he co-founded with George K. Spoor, a distributor of screen equipment, hired a little known actor called Charlie Chaplin and made three films with him in Niles. It hardly seemed possible that Gilbert Anderson the famous actor, film producer, and eventual Academy Award recipient was the same Gilbert Anderson of Andermat. Finally, after many hours of research, newspaper clippings from 1916 confirmed they were one and the same. Perhaps it’s not surprising that Gilbert Anderson was successful in keeping his failures with the Gray Taxicab Company and Andermat little known.

Though in general little is known about the Andermat plane, it holds a place in history and enthusiasts of early aeronautics hold it in fascination. No matter the outcome, the Andermat plane, the largest flying plane at its time, was built and tested in Sunnyvale, California, and earned a huge contract with the U.S. military. Both Anderson and Matches deserve credit for such an incredible accomplishment. 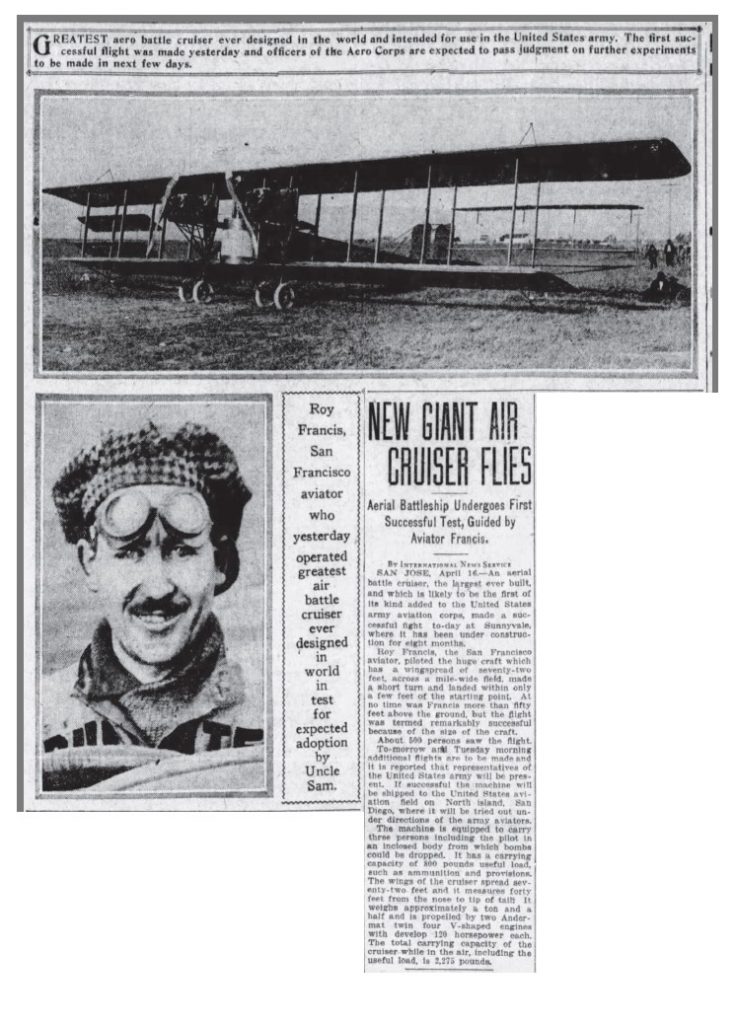