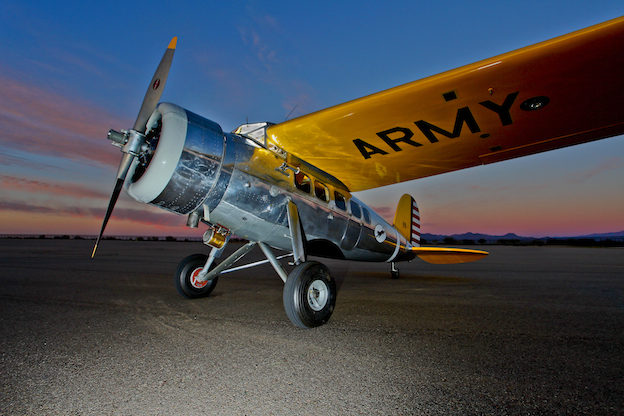 The year was 1928 and the concept of the airplane was changing radically. While barnstormers still landed rickety surplus biplanes in pastures to hop passengers, those days were waning fast. Utility was driving designs to be faster and sleeker. But, when the Lockheed Vega flew in June of that year, it was as if a spaceship had landed. Its lines and performance were a quantum leap forward, especially as it continued to be improved to keep up with the rapidly changing times.

The Vega was born into the equivalent of the Space Race: every aircraft manufacturer was trying to establish itself at the leading edge of the aviation community. However, even as it was being challenged, the Vega continued to be at the top of the heap. In this case, and airplane’s position on the aviation totem pole was determined by speed and distance records. The game was to see who could fly from point-A to point-B faster than anyone else, and the Vega undoubtedly set more of those records than any other single airplane. Reportedly, it garnered over 72 records and became aviation’s high-stepping darling.

Celebrity pilots of all types flew Vegas. Amelia Earhart set her share of records in one. Jimmy Doolittle flew one while with Shell Oil. Jimmy Mattern set records right and left such as New York-to-Berlin, 4,100 miles in just over 29 hours. Wiley Post made the first round-the-world trip. Record-setting pilots were national heroes. The country was in love with record-breaking pilots and record-breaking pilots were in love with Lockheed’s Vega.

The Vega was of all-wood construction with the fuselage being two plywood shells that were formed in concrete molds then infested with hundreds of formers, stringers and corner blocks. Up front, as the engines installed gained in power, eventually they settled on a P & W R-1340 turning out 450hp. At least one mounted a later version of the same engine of 600hp.

Today, only one Vega stills plies the skies and that is John Magoffin’s 1933 metal fuselage version. When Detroit Aircraft Corporation bought a controlling share in Lockheed, one of their first projects was to replace the wood fuselage with an identical version crafted in aluminum. It is surmised that because it was obvious that wooden airplanes were becoming passé and the military wanted aluminum airplanes, this was a Lockheed design exercise that was undertaken to teach themselves how to build metal airplanes.

Nine metal fuselage Vegas, of the 128 Vegas produced, were built with Magoffin’s Lockheed-Detroit DL-1B being one of them. After it left the factory it rotated through a long series of owners (a fledgling Braniff Airways, being one of them). By 1943, it was in Alaska, where it remained its entire working life and the cargo was as likely to be moose meat as miners heading back to their claims. It was hardcore  blue collar aviation. The Vega’s glory days were behind it.

In 1957 a bad landing next left it laying In a gully next to a remote Alaskan runway where it stayed for years. By the 1960s, the hulk found its way back to the lower 48 to be rebuilt by Robert Taylor and Jack Lowe, including a new wing, which was a monumental undertaking. A later owner ground looped the airplane several times causing serious damage and that’s when John Magoffin of Tucson, Arizona, rescued it. Magoffin worked with Rick Barter, owner of Arizona Airframe, in Marana, Arizona on the project, which, after 18 years found its way back into the air in late 2013.

Although it never served in the military, John’s airplane wears the livery of one of two metal Vegas ordered by the military. This one was designated Y1C-12 and was assigned to the 35th Pursuit Squadron at Langley Field, Virginia in 1932.