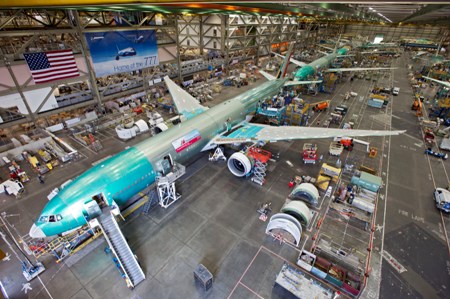 Boeing delivered to American Airlines its first 777-300ER (extended range) jetliner on Tuesday as part of the airline’s fleet modernization effort and global network strategy. The delivery makes the Fort Worth, Texas-based carrier the first U.S. airline to add the 777-300ER to its fleet.

American Airlines plans for the airplane to enter service in early 2013 on the Dallas/Fort Worth-Sao Paulo route.

“This marks an important milestone in our fleet renewal program and is another tangible example of our progress in building the new American for our customers and our people,” said Bella Goren, American’s chief financial officer. “This aircraft will provide our customers with a new level of comfort and convenience, along with delivering increased efficiency and better operating economics.”

American’s 777-300ER is configured with three classes, featuring lie-flat seats in First and Business Class. The airplane also is equipped with the Panasonic eXConnect Wi-Fi system, which Boeing installed during production, to keep passengers connected while traveling internationally.

“This delivery demonstrates American’s commitment to transforming its fleet into one of the youngest and most fuel efficient in the industry,” said John Wojick, senior vice president, Global Sales, Boeing Commercial Airplanes. “The 777-300ER is the ideal airplane for American’s fleet renewal effort providing unparalleled operating economics, long-range capability, reliability and passenger comfort.”

The Boeing 777-300ER extends the 777 family’s span of capabilities, bringing twin-engine efficiency and reliability to the long-range market. The airplane is 19 percent lighter than its closest competitor, produces 22 percent less carbon dioxide per seat and costs 20 percent less to operate per seat. The airplane can seat up to 386 passengers in a three-class configuration and has a maximum range of 7,930 nautical miles. The 777 family is the world’s most successful twin-engine, twin-aisle airplane.

For photos by Terry Maxon of The Dallas Morning News, click here.