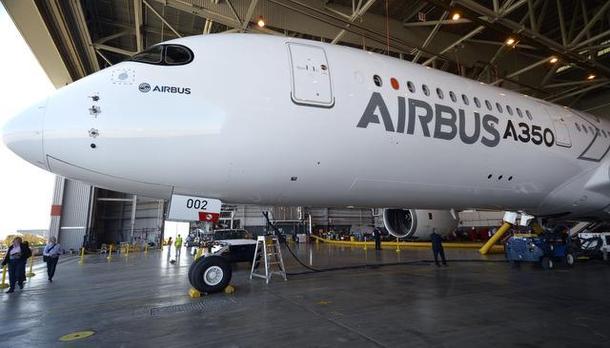 There was a French visitor at the American Airlines maintenance hangar at the airport Monday.

Airbus flew in one of its test A350s from Toulouse, France, late Sunday evening and put it on display for the media and employees at American. The Fort Worth-based carrier has 22 A350-900 XWB aircraft on order, with the first expected to be delivered in 2017.

The aircraft at DFW is the second A350 off the Airbus assembly line and is on its way to a Florida climate temperature testing facility. It is the only test aircraft that has economy and business class seats inside in addition to the flight testing equipment.

The A350 has a composite fuselage that reduces cabin noise and can fit up to 315 seats with nine across in economy class in a 3-3-3 configuration. The overhead storage compartments are larger and the aircraft has panoramic windows and mood lighting.

For video and the complete story by Andrea Ahles of the Fort Worth Star-Telegram, click here.