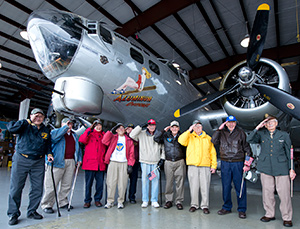 The Experimental Aircraft Association’s Boeing B-17G “Aluminum Overcast” has made many memorable flights throughout the country, but one would be hard-pressed to come up with one more special than what occurred yesterday in Oshkosh, Wis. Ten World War II U.S. Army Air Corps veterans – representing all 10 Flying Fortress crew positions from pilot to tailgunner – were brought here to be reunited with the aircraft in which they helped to preserve liberty and freedom. All from Wisconsin, they ranged from age 90 to 94, and brought family members with them.

The special event was the brainchild of Chris Henry, who works in the EAA membership services department focusing mainly on EAA’s annual B-17 tour. He called it a once in a lifetime occurrence. “A plane that was built for war has brought these veterans and families together for such a special occasion,” he said. “It’s very gratifying to be able to help make this happen.”

The veterans and their family members arrived Monday morning at the EAA AirVenture Museum lobby on a day that at first appeared unfit for flight following an overnight spring snowstorm. They were given a police escort to EAA’s Weeks Hangar located on Wittman Regional Airport. Several vintage army vehicles from the Military Veterans Museum and Education Center in Oshkosh also helped pave the way.

For the complete story by the EAA, click here.

Photo by Jason Toney via EAA