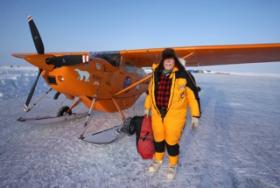 Alaskan pilot Art Mortvedt is due back in Fairbanks any day now from his solo flight to the North Pole. It was the second leg of a mission to realize his long-held dream of flying a single-engine aircraft to both North and South poles.

KUAC-FM caught up with Art Mortvedt on Tuesday afternoon, somewhere in the skies over Nunavut, in far northern Canada. In a sometimes-spotty satellite-phone connection, Mortvedt reported that he’s headed west in his sturdy Cessna 185, as weather allows, on his way home after reaching the North Pole three and a half weeks ago.

“I’m just cruising along here at around 4,000 feet in between the village of Kugluktuk and Great Bear Lake,” he said, “and I’ll be headed in the Northwest Territories, and then into the Yukon and then back to Alaska.”

Mortvedt says he was glad to see the fringes of boreal forest appear not long after he left the village of Kugluktuk. He says the scroungy black spruce had never looked so beautiful, after weeks of seeing nothing but an endless expanse of snow and ice stretching from horizon to horizon, pretty much ever since he left Fairbanks on March 20.

For the complete story by Tim Ellis of KUAC-FM, click here.

Photo by Art Mortvedt via KUAC-FM