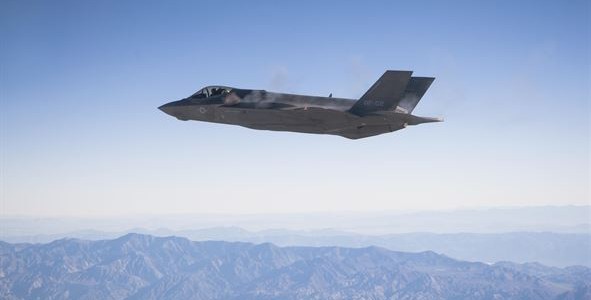 “Alaska combines a strategically important location with a world-class training environment. Basing the F-35s at Eielson AFB will allow the Air Force the capability of using the Joint Pacific Alaska Range Complex (JPARC) for large force exercises using a multitude of ranges and maneuver areas in Alaska,” said Secretary of the Air Force Deborah Lee James. “This, combined with the largest airspace in the Air Force, ensures realistic combat training for the (Defense Department).”

Proximity to the JPARC will enable the Air Force to take advantage of approximately 65,000 square miles of available airspace for realistic, world-class training in the Air Force’s most advanced fifth-generation fighter.

The decision culminates a three-year process that included an extensive environmental impact statement that examined impacts on such factors as air quality, noise, land use and socioeconomics.

“The decision to base two F-35 squadrons at Eielson AFB, Alaska, combined with the existing F-22 Raptors at Joint Base Elmendorf-Richardson, will double our fifth-generation fighter aircraft presence in the Pacific theater,” said Air Force Chief of Staff Gen. Mark A. Welsh III. “Integrating that fifth-generation force with Navy, Marine, and allied F-35 forces will provide joint and coalition warfighters unprecedented survivability, lethality and battlespace awareness in contested environments. It’s an exciting time for Pacific airpower.”

The base is projected to receive two squadrons of F-35As, which will join the wing’s F-16 Fighting Falcon aggressor squadron currently assigned to Eielson AFB.

On-base construction to prepare for the aircraft is expected to start in fiscal year 2017 in order to be ready to accept the first F-35As, which are currently scheduled to begin arriving in 2020.

Preliminary estimates had the new aircraft arriving a year earlier, but officials say the 2020 arrival will provide the Air Force more time and grow its active-duty maintenance force.

“The Air Force is facing a shortage of experienced, active-duty fighter aircraft maintainers as we transition from legacy aircraft to the F-35A,” said Lt. Gen. John B. Cooper, the deputy chief of staff the Air Force for logistics, installations and mission support. “Adjusting the initial plan and slightly accelerating F-35A arrivals at Burlington Air Guard Station, Burlington, Vt., to fall 2019 will allow the service to stick to the overall F-35 rollout schedule, while capitalizing on the Air National Guard’s experienced fighter aircraft maintenance force as we put additional measures in place to increase the number of trained active-duty maintainers.”

The F-35A, manufactured by Lockheed Martin, is a fifth-generation fighter aircraft intended to be the Air Force’s premier strike aircraft through the first half of the 21st century. It is a multi-role fighter that is expected to eventually replace the service’s legacy air-to-ground fighter fleets.