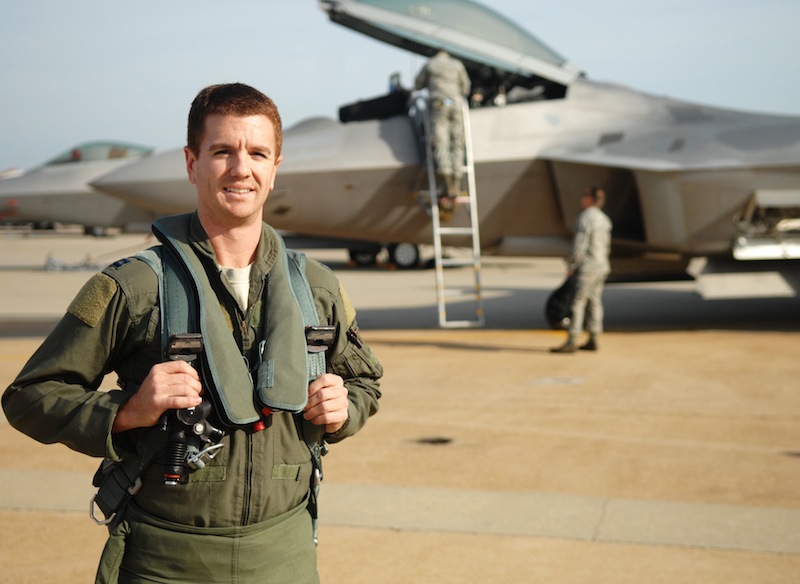 The serenity of a sleepy, morning sky broke as a dark form rose from the ground and blotted out the sun. An F-22 Raptor maneuvered through the dawn, banking and rolling, rising and falling at impossible angles. Through the cockpit window, a faceless visor disguised the pilot’s exertion.

He angled the Lockheed Martin jet into a vertical climb as the engines roared to defy gravity. His plane leveled out, and he slowly spun to the earth. Such complex maneuvers become routine for one pilot at Langley Air Force Base, Va.

Capt. Patrick Williams, the new Air Force F-22 Raptor demonstration pilot, practiced these maneuvers to give crowds worldwide a taste of both the Raptor’s, and the Air Force’s, capabilities.

“People typically see the Air Force on the news, and that’s it,” said Williams. “The air show is the best way we can say ‘Hey America, look at this awesome airplane you’ve given us. This is why we are so successful at what we do.'”

Before taking the controls of the world’s premier, fifth-generation jet fighter, Williams honed his skills in the back-country skies of Idaho at the age of five. “I still remember my very first log-book entry,” he said. “My dad let me sit on his lap during a flight, so he wrote down the entry. It said ‘we saw horses and cows in the Salmon River valley.'”

After speaking with his father about the future of flying as a career, Williams embraced his desire to fly fighters by joining the U.S. Air Force Academy in Colorado Springs, Co., as a prospective pilot.

During his tenure at the academy, Williams participated in the glider program, became a cadet instructor and graduated with a degree in Astronautical Engineering. Upon completion of his academy training, he travelled to Mississippi to begin basic fighter training, after which he began training to fly the F-15C Eagle.

Williams was assigned to the 12th Fighter Squadron in Alaska, and then transferred to the Raptor once the 90th Fighter Squadron stood up. After showing his skills in the cockpit at both Alaska and Hawaii, the Air Force selected him to become the next Raptor demo pilot.

With the new Raptor demo season quickly approaching, Williams said he was excited to show the world the power of the jet. The demo team plans to tour across the country and hopes to make some international stops, too. As a demo pilot, Williams said he is honored to be the face of both the Raptor and the Air Force.

“I have to pinch myself every time I get out of the jet,” said Williams. “You land, look back and think ‘I can’t believe I get to fly that airplane.'”

Williams shares his passion for flying with the awestruck audience each time he hops into the cockpit to perform. His life in the sky inspires those watching to reach up and grab their own goals, even if they are small boys from Idaho.