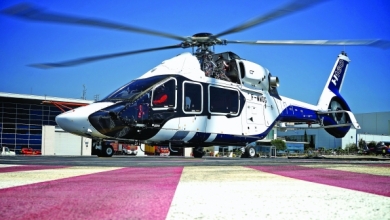 Airbus Helicopters has completed the first flight of its H160 twin-engined medium helicopter.

The company quietly passed the milestone on June 12, at its facility at Marseille’s Marignane Airport, and photos of the occasion appeared on social media websites on June 13. Airbus is yet to comment on details of the flight, which follows the beginning of ground tests of the first prototype – PT1 – on May 28, after a visit by French Prime Minister Manuel Valls.

The first flight is a significant moment for the H160, which is the first new design to be launched under the banner of Airbus Helicopters, and its new development carried out with techniques benchmarked against those of its colleagues building airliners in Toulouse.

For the complete story by Tony Osborne of Aviation Week, click here.