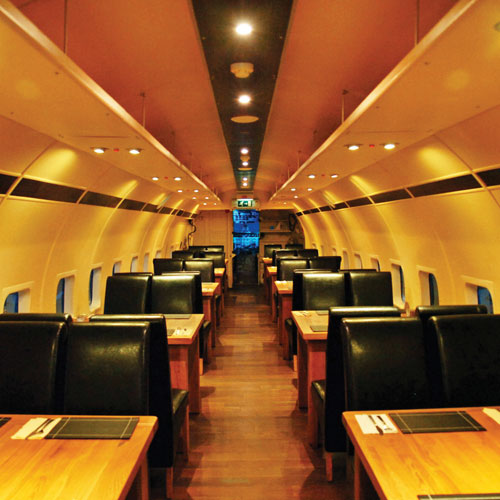 Do you remember the 1950s and ’60s and those exotic, full-service meals aboard Douglas DC-6s plying their airborne way from the cold of Chicago to the tropical heat of Florida? These aerial dining experiences are a distant memory, except for the elite few now able to afford first-class intercontinental airline tickets. Unless, that is, you travel to Coventry airport in the UK Midlands and visit AirBASE.
AirBASE has evolved from Mike Collett’s collection of airworthy transport aircraft, some of which were employed by his air freight company, Air Atlantique. His fleet of Douglas DC-3 and DC-6 freighters was iconic in European skies, serving ad hoc requirements for shipping anything from horses to gearboxes. The DC-3s were also employed on oil-slick spray dispersant duties and latterly offered pleasure flights to piston-engine-hungry aviation buffs. These Douglas transports made way for Electras and now British Aerospace ATPs.
The centerpiece of AirBASE now is the DC-6 Diner. Walking up a gently sloping tarmac pathway, you arrive at the rear cargo door of Douglas DC-6A G-SIXC and a cocktail bar in the rear of the fuselage. Here you can sip a drink, choose from a menu that includes delicacies such as Cloudmaster mixed grill or a Rapide Australian rump steak. Then in the main seating area of the fuselage is diner-style seating, where your meal and drinks are served, as you look through the DC-6’s windows to the rest of the AirBASE aircraft collection and the airport activity beyond. Manager Tony Caunce will accommodate just about any requirement, from corporate meeting, wedding receptions, or that special romantic night out (phone +44 (0)24 7688 2604).
This DC-6B was one of the last off the Santa Monica production line (s/n 45550) in September 1958, delivered to southeast Asia for Royal Air Lao and Civil Air Transport, flying covertly with Air America until converted back to DC-6A status and returning the U.S. in 1975 to fly with Southern Air Transport and Zantop International as a freighter. It joined Air Atlantique’s fleet in 1987 and remained active until a few years ago when maintenance costs forced its grounding.
Pleasure flights at AirBASE can be purchased in an eclectic mix of British aircraft, a DH.104 Dove 8 (G-DHDV), a Percival Prentice T.1 (G-APJB), Dragon Rapides G-AGTM or G-AIDL, plus the chance to fly aerobatics in their DHC.1 Chipmunk G-APLO. Further news is that AirBASE hope to be able to offer flights in a DC-3 again soon, and the prospect of the arrival of a Douglas DC-4 from North Weald, Essex (north of London) is also anticipated. Their workshop and ramp are heaving with other prop-liners: an Avro Shackleton MR.2 (WR963), Howard 500, Scottish Aviation twin Pioneer, Percival P.66 Pembroke, Avro Anson T.21, other Rapides, another Dove, Percival Proctor, Chrislea CH.3 Super Ace and North American T.28. There are also ’50s-era jets as well; you could almost pass up on the diner with so much else to see! —Geoff Jones