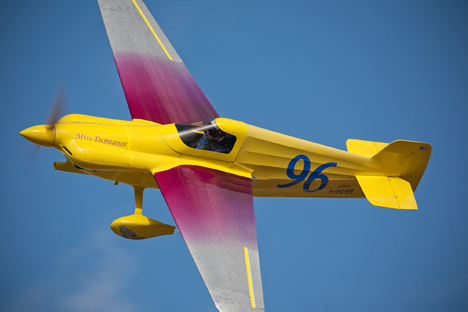 A Boise, Idaho, emergency physician won the Silver Heat of the Formula One class at the Reno Air Races in mid-September in his rookie year as a race pilot.

Matt Conklin had been interested in racing since the late Caldwell crop duster Gary Hubler started winning his five straight Gold Heat Formula One Championships 10 years ago, inspiring a stable of Treasure Valley pilots to compete at the Reno Air Races. Conklin joined veteran Boise race pilot Brian Reberry, who flies an Airbus A320 for Virgin America, to represent Idaho in the Formula One class.

Reberry introduced his custom-built gull-wing racer, “September Fate,” at the 2012 races but a last-minute series of mechanical surprises convinced him to skip 2013 and begin planning for 2014. He did fly Jim Whiteley’s Cassutt III-M “Tony the Tiger,” admitting it’s the slowest plane in the class. He flies it just for fun, even when his new racer is running. Over the years, Conklin grew more interested in air racing as he honed his piloting skills flying in the Idaho backcountry and then acquired a seaplane rating from Hayden flight instructor Mike Kincaid.

For the complete story by Mike Satren of The Coeur d’Alene Press, click here.