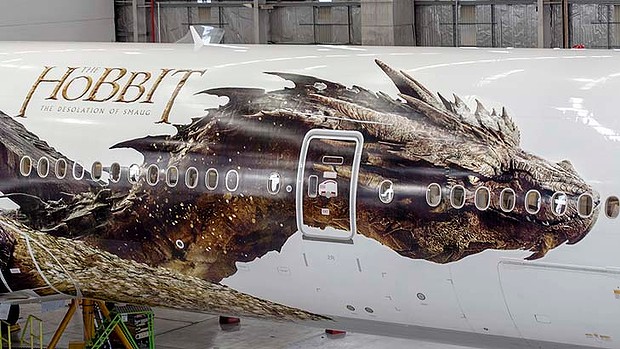 Hobbit fans can finally see the most-anticipated character in the movie trilogy, the dragon Smaug. While Smaug has previously been glimpsed in part, his full body has never been revealed.

Ahead of the premiere of the second part of the Hobbit trilogy, “The Desolation of Smaug,” Air New Zealand on Monday unveiled a 54-metre long image of the dragon on the sides of a Boeing 777-300. Air New Zealand chief executive Christopher Luxon said the airline had worked with Weta Digital “to reveal their star to the world”.

For the last premiere, the airline created another Hobbit-themed plane which carried stars to the Wellington, N.Z., premiere.

For the complete story via The Sydney (Australia) Morning Herald, click here.