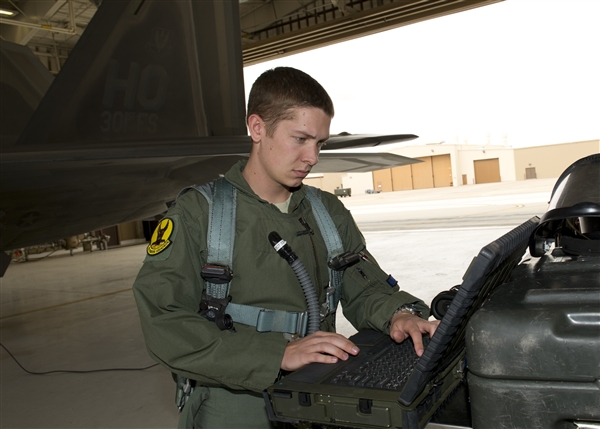 After three years of rigorous training, 25-year-old U.S. Air Force 1st Lt. Andrew Van Timmeren, a pilot with the 7th Fighter Squadron here at Holloman Air Force Base, N.M., finally got to climb into the cockpit of a Lockheed Martin F-22 Raptor — the world’s most advanced fighter jet — and take it for a spin.

The single-seat, twin-engine aircraft is an air dominance fighter that uses stealth technology and eventually will replace the aging F-15C Eagle fighter jets. “It is a pipe dream to fly the Raptor,” said Van Timmeren, who was assigned the F-22 after completing undergraduate pilot training.

The Grand Rapids, Mich., native studied political science at the U.S. Air Force Academy and graduated in 2010. Everyone asked him what he wanted to fly while he was at the academy, he said, but cadets who expressed a desire to fly the F-22, were laughed at because it was an unrealistic dream.

Previously, F-22 aircraft were assigned only to F-15 and F-16 pilots with fighter experience. The Air Force opened up the F-22 pipeline to new pilots after several years, once experienced instructor and evaluator pilots were in place.

“It is well within the capacity of these new pilots to fly the F-22,” said Air Force Lt. Col. Shawn “Rage” Anger, 7th Fighter Squadron commander. “New pilots make our experienced instructor and evaluator pilots even better at their jobs because of the meticulous training required when you are brand new to the jet.”

Once pilots arrive to the 7th Fighter Squadron, they have several weeks of training before they are considered “combat ready” in the F-22. Since the F-22 is a single-seat airplane, its pilots are on their own, with a wingman flying alongside for support. Air Force 1st Lt. Stephen Renner, another 7th Fighter Squadron pilot, said that when he walked out to an F-22 for the first time, he had to do a “gut check.”

“I knew I was prepared because of my amazing training, but I did feel anxious to fly the F-22 on my own the first time,” he said.

Renner graduated from the Air Force Academy with a degree in astronautical engineering in 2010. The Piedmont, Calif., native said he has wanted to be a pilot for as long as he can remember.

“It has been a long road, but entirely worth it,” he said. “Flying the F-22 is a far-fetched dream come true.”

Van Timmeren and Renner both graduated at the top of their undergraduate pilot training classes. “We were pretty lucky to get F-22 drops, because it doesn’t happen often,” Renner said.

“Flying is a bug I was born with,” he added. “I was just blessed to be able to realize it, and to chase my dream.”