In partnership with the Paris, France-based technology company Histovery, the Air Force Museum Foundation will open a new interactive augmented reality exhibit titled “D-Day: Freedom from Above,” at 9 a.m. on Monday, May 13 in the second building of the National Museum of the U.S. Air ForceTM.  The U.S. premiere of this exhibit has been made possible in association with the French Airborne Museum of Sainte-Mere-Eglise, in Normandy.

This 3,500 sq. ft. exhibit will focus on the D-Day missions of the 82nd and 101st Airborne divisions in Sainte-Mere-Eglise, the first French town to be liberated on June 6, 1944.  Using tablets that are part of Histovery’s proprietary HistoPad Augmented Visit solution, museum visitors will experience the reality of the D-Day airborne mission in an up close and personal way never possible before. 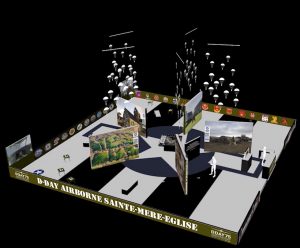 The HistoPad Augmented Visit experience will engage visitors with a historically accurate journey back in time to 1944. HistoPad allows visitors to manipulate a series of 3D virtual relics and artifacts, see inside of aircraft, virtually operate and manipulate full 360º views of equipment, compare scenes today to how they appeared in 1944, view unpublished photographs and extracts of archival films and much more.

Beginning May 13 and continuing through the end of the year, HistoPad tablets will be available for exhibit visitors to rent through the Air Force Museum Foundation for only $5 each. Visitors should allow about 40 minutes to tour the entire D-Day exhibit, but can also adapt to their own pace by selecting content that is most relevant to them.

For additional information on the museum’s D-Day events and exhibit, including complete schedule information click here.