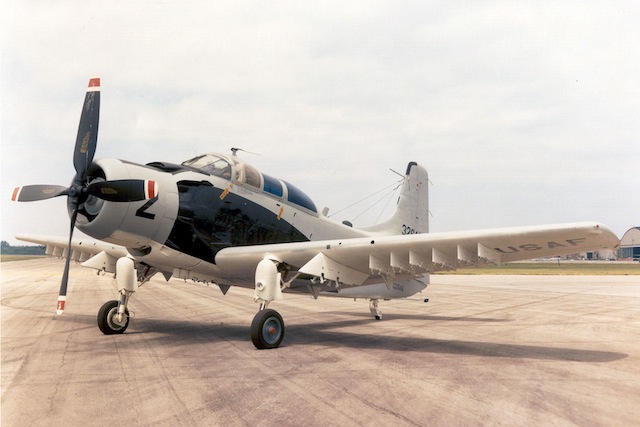 All galleries at the National Museum of the U.S. Air Force in Dayton, Ohio, have re-opened following their temporary closure due to necessary maintenance on the Douglas A-1E Skyraider.

An inspection conducted last Friday by museum restoration staff found that the aircraft contained fuel. Although there was no sign of fuel leakage, museum and Wright-Patterson Air Force Base officials decided to temporarily close the surrounding galleries in order to expedite the defueling of the aircraft by Air Force safety standards.

Museum staff and base personnel defueled and purged an estimated 200 gallons of fuel from the A-1E over the weekend and reinstalled exhibit railings and panels in the surrounding area.

“Discovering fuel in an aircraft on display in the museum is highly unusual and we regret having to inconvenience our visitors by temporarily closing several galleries,” said museum director Lt. Gen. (Ret.) Jack Hudson. “Safety must always come first though, and the team did a superb job in resolving this matter so that the galleries could be re-opened today.”

Museum procedures call for defueling and purging remaining fuel from all aircraft before they are placed on display. After the A-1E arrived in 1968, the exhibit preparation and safety certification was performed by the 4950th Test Wing at Wright-Patterson Air Force Base, which stated the aircraft had been defueled and purged. Restoration staff is currently continuing the inspection of aircraft on display to ensure they meet current safety requirements.

The National Museum of the United States Air Force is located on Springfield Street, six miles northeast of downtown Dayton. It is open seven days a week from 9 a.m. to 5 p.m. (closed Thanksgiving, Christmas and New Year’s Day). Admission and parking are free.