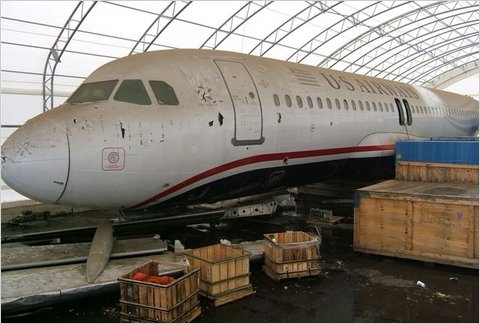 Photographs by Shawn A. Dorsch

The Flight 1549 Airbus at its current home in a warehouse in Kearny, N.J.

US Airways Flight 1549 may make it to North Carolina after all.

The plane, which splash-landed in the Hudson River two years ago next week, may soon be bound for the Carolinas Aviation Museum in Charlotte, the museumís president said on Wednesday. But it would have to travel there on the back of a truck because it no longer has its engines or its wings or tail.

With Capt. Chesley B. Sullenberger at the helm, the plane took off from La Guardia Airport for a two-hour flight to Charlotte on Jan. 15, 2009. Minutes later, after striking a flock of geese that knocked out both of its engines, it was floating in the frigid Hudson.

After all 155 of its passengers and crew members were rescued, the plane was fished out of the water and hauled to a warehouse in Kearny, N.J. There it has sat for almost two years. It has been taken apart, combed over by federal crash investigators and put up for auction ó apparently without a taker. 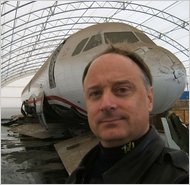 Shawn A. Dorsch, president of the Carolinas Aviation Museum, on a recent visit to the plane at the New Jersey warehouse.

Now, Shawn A. Dorsch, the president of the museum in Charlotte, says he is in the ìvery final, final stagesî of negotiations to acquire the plane and its parts from Chartis, the company that insured the plane for US Airways. Mr. Dorsch declined to say whether Chartis would receive any money for the plane, an Airbus A320. A Chartis spokeswoman declined to comment, as did a spokesman for the airline.

Mr. Dorsch said he intended to invite museumgoers to watch the reassembly, which he said would probably take months. He said he hoped to move the plane in May. He talked to Mr. Sullenberger on Wednesday, he said, and the retired pilot has already promised to send the uniform he wore on the last flight to be included in the exhibit.

Charlotteís mayor, Anthony Foxx, said his city was a fitting site for the plane because about 100 residents of the area were on Flight 1549 and because aviation is a big industry there. ìWe hope that when all is said and done we have a monument to not only the heroism but a way of framing a conversation about aviation safety and creating a vehicle to teach kids about aviation,î Mr. Foxx said.

Officials of the Intrepid Sea, Air & Space Museum, which is on an aircraft carrier docked just a few hundred yards from where Flight 1549 hit the water, briefly considered trying to obtain the plane but decided that it was not presentable.

Mr. Dorsch thinks otherwise. ìThis is a tremendous artifact,î he said. ìThe Coke cans are still in the serving cart, the manuals are still in the cockpit. It has the dent from the tugboat, the dents from the birds. All of that is part of the story.î