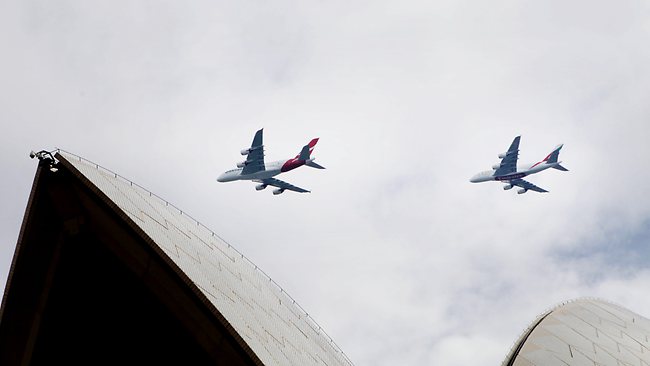 Two Airbus A380s made a dramatic tandem flight over the famous Australian landmark Sydney Harbour Bridge today to launch the new Qantas-Emirates partnership, hailed by the Australian carrier as a “seismic shift” in aviation. The tie-up, approved last week by Australia’s competition watchdog, allows the two airlines to combine operations for an initial period of five years, including coordinating ticket prices and schedules.

It will also see Qantas switch its hub for European flights from Singapore to Emirates’ Dubai base as it attempts to turn around its struggling international business.

“Dubai is the best hub for Qantas in the 21st century,” the company’s chief executive Alan Joyce said after watching the flyover by superjumbos from both airlines at 1,500 feet (450 metres) over Sydney’s famous landmark. “It is eight hours’ flying time from 75 per cent of the world’s population.”

For the video and complete story on The Australian, click here.

Photo by Nikki Short, The Australian