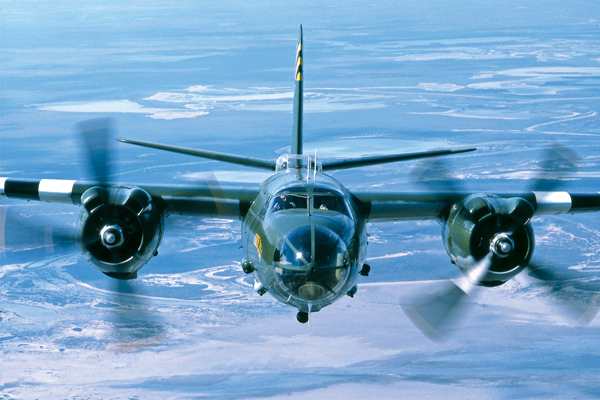 Our Martin B-26 Marauder crew arrived on the island of Sardinia in the Mediterranean Sea to begin our combat tour in July of 1944. We joined the 320th Bomb Group, and we were assigned to one of the four squadrons, the 441st. The Group was operating off Decimomannu airfield, a one-of-a-kind dirt field with six oiled, parallel runways, 8,200 feet long (Editor’s note: Picture that—six 8,000 foot runways side by side!). We took off on missions in flights of three, at 30-second intervals. An 18-plane group could be launched in just three minutes, and it reduced join up time and extended our range.

Our missions took us to targets in Italy in close support of the Fifth Army, and in August we bombed the beaches of Southern France for the invasion. Allied forces advanced rapidly on both fronts, and we were soon coming back to Decimo with our gas gauges flirting with “empty,” and a move closer to the action was inevitable. There were rumors that we might be going to an airfield near Viterbo, a town north of Rome, or Corsica, to be exiled on another island, smaller than Sardinia. No, Lord, please, not Corsica. We wanted girls, beautiful Italian girls, and fancy restaurants to take them to. We sweated while the coin was in was in the air … It landed tails, and the 320th was going to Corsica.

To read more, click the link to open the PDF: A Wingspan From Disaster