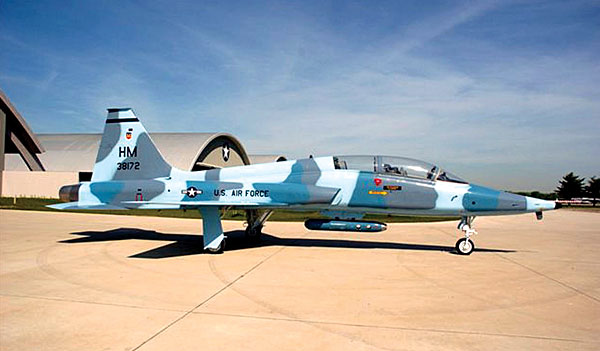 In case you missed it, earlier this year the Northrop T-38 celebrated its 50th anniversary of military service.

First flown in March 1959, the Talon entered the Air Force inventory two years later as the world’s first supersonic trainer. Since then, it has served in the U.S. Navy, NASA, Nationalist China, Germany, Portugal, South Korea and Turkey. The last Talon (the 1,187th) was delivered in 1972.

Northrop developed the landmark trainer from its lightweight fighter—the F-5 Tiger. Though two-seat F-5s were built, they differed from the Talon in construction details as well as in their possession of armament. A limited number of armed T-38s also were produced.

The public best knew the Talon as the Thunderbirds’ mount from 1974 to 1983, before the team converted to F-16s. Presently, T-38s serve as high-performance instruction aircraft for pilots in the F-15, F-16, F-22 and B-1 training pipeline.

Powered by two GE J85 engines, the T-38 is capable of Mach 1.3 and a service ceiling of 50,000 feet. Approximately 450 are listed on the Air Force inventory, and there are plans to retain the Talon until 2020. Potential replacements include the Korean T-50 Golden Eagle and the British Aerospace Hawk 128. The T-38 joins a select circle of half-century aircraft that includes the B-52, KC-135 and C-130. —Barrett Tillman