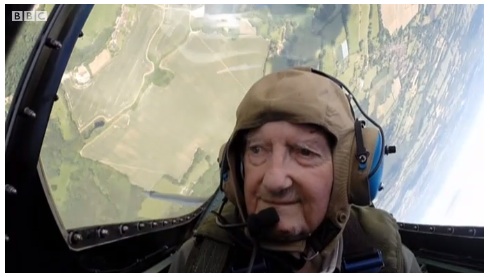 A 91-year-old former fighter pilot took the controls and looped the loop when he was given the chance to fly his first Spitfire.

Neville Croucher, from Chartham near Canterbury, England, survived 800 combat hours in the cockpit of Hawker Hurricane fighters during World War Two. He was given the chance to fly a Supermarine Spitfire at Headcorn Aerodrome having spent all his life wondering what it would be like to fly one of the famous planes.

For the video by Robin Gibson of the BBC, click here.