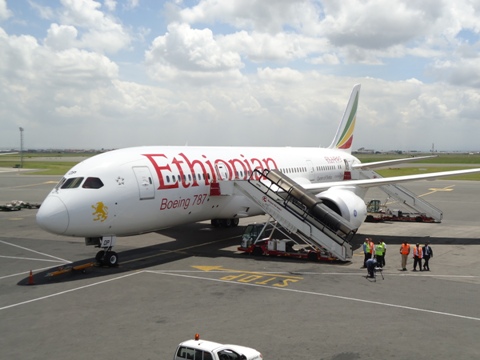 Editor’s note: The following story is an April 27th entry on Randy’s Journal, a blog written by Boeing executive Randy Tinseth, and offers a unique perspective on the first flight of a Boeing 787 Dreamliner after its problematic battery issues — which kept the worldwide 787 fleet grounded for some time — had been resolved.

I’ve taken countless flights during my career at Boeing. But I can tell you the one I took today may be the most special. I had the privilege of being on the first 787 to return to commercial service with our new battery system. Ethiopian Airlines flight 801 from Addis Ababa to Nairobi landed earlier today.

The flight left on time, landed early and was truly perfect. Many of the passengers had no idea they’d be flying on the 787 until the bus dropped them off at the air stairs. It was a fantastic, party-like atmosphere as we boarded. As one surprised passenger told me after realizing he’d be flying on the Dreamliner — “this is history.”