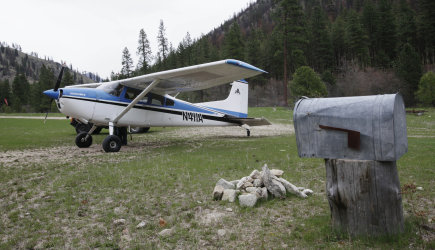 Everyone knows the U.S. Postal Service is in trouble. Indeed, the USPS had a total of 787,538 workers back in 2000. Yet as of the last official count in 2010, the figure dropped to 583,908. Amid all the reductions and reorganizations, however, 76-year-old Ray Arnold soldiers on as the last wilderness air-mail courier delivering mail in the continental U.S.

For 38 years, Arnold has flown the mail route through the Frank Church-River of No Return Wilderness in central Idaho, the nearly 3-million-acre area that is the second largest wilderness expanse in the country (the largest wilderness area outside of Alaska is Death Valley, Calif.). And so every Wednesday for nearly four decades, Arnold has dropped off postal shipments to 22 regional airports in a region that is roughly the size of Kentucky.

He flies a Cessna 185, a single-engine aircraft that seats six and reaches an altitude of 9,000 feet, he said. He first landed the gig 51 years ago when he moved to the area from Minnesota to teach high school math and the hard sciences. But “flying was much more exciting to me,” he told AOL Jobs.

For the complete story by Dan Fastenberg of AOL Jobs, click here.