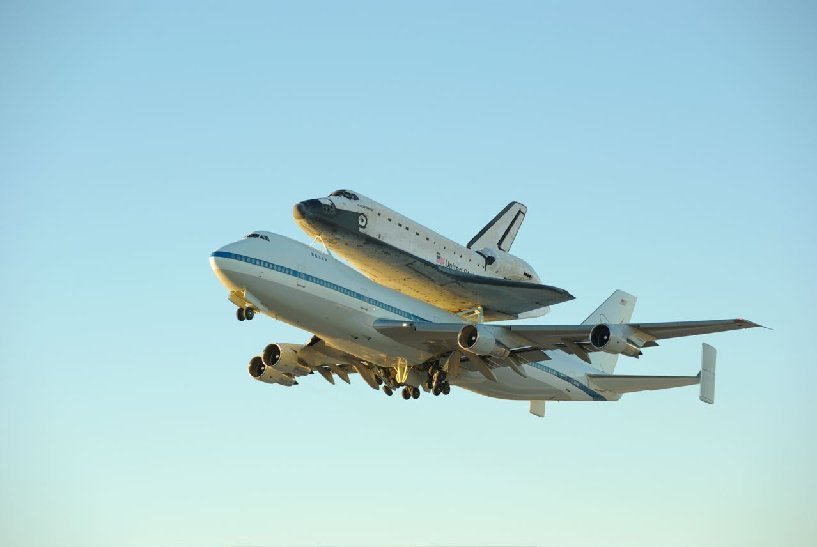 A quick “trip report” from the pilot of the 747 that flew the shuttle back to Florida after the Hubble repair flight.A humorous and interesting inside look at what it’s like to fly two aircraft at once . . .

Well, it’s been 48 hours since I landed the 747 with the shuttle Atlantis on top and I am still buzzing from the experience.  I have to say that my whole mind, body and soul went into the professional mode just before engine start in Mississippi, and stayed there, where it all needed to be, until well after the flight…in fact, I am not sure if it is all back to normal as I type this email.  The experience was surreal.   Seeing that “thing” on top of an already overly huge aircraft boggles my mind.  The whole mission from takeoff to engine shutdown was unlike anything I had ever done.  It was like a dream…someone else’s dream.

We took off from Columbus AFB on their 12,000 foot runway, of which I used 11,999 1/2  feet to get the wheels off the ground.  We were at 3,500 feet left to go of the runway, throttles full power, nose wheels still hugging the ground, copilot calling out decision speeds, the weight of Atlantis now screaming through my fingers clinched tightly on the controls, tires heating up to their near maximum temperature from the speed and the weight, and not yet at rotation speed, the speed at which I would be pulling on the controls to get the nose to rise.  I just could not wait, and I mean I COULD NOT WAIT, and started pulling early.  If I had waited until rotation speed, we would not have rotated enough to get airborne by the end of the runway.  So I pulled on the controls early and started our rotation to the takeoff attitude.  The wheels finally lifted off as we passed over the stripe marking the end of the runway and my next hurdle (physically) was a line of trees 1,000 feet off the departure end of Runway 16.  All I knew was we were flying and so I directed the gear to be retracted and the flaps to be moved from Flaps 20 to Flaps 10 as I pulled even harder on the controls.  I must say, those trees were beginning to look a lot like those brushes in the drive through car washes so I pulled even harder yet!  I think I saw a bird just fold its wings and fall out of a tree as if to say “Oh just take me”.  Okay, we cleared the trees, duh, but it was way too close for my laundry.  As we started to actually climb, at only 100 feet per minute, I smelled something that reminded me of touring the Heineken Brewery in Europe ….I said “is that a skunk I smell?” and the veterans of shuttle carrying looked at me and smiled and said “Tires”!  I said “TIRES???  OURS???”  They smiled and shook their heads as if to call their Captain an amateur…okay, at that point I was.  Th! e tire s were so hot you could smell them in the cockpit.  My mind could not get over, from this point on, that this was something I had never experienced.  Where’s your mom when you REALLY need her?

The flight down to Florida was an eternity.  We cruised at 250 knots indicated, giving us about 315 knots of ground speed at 15,000′.  The miles didn’t click by like I am use to them clicking by in a fighter jet at MACH .94.  We were burning fuel at a rate of 40,000 pounds per hour or 130 pounds per mile, or one gallon every length of the fuselage.  The vibration in the cockpit was mild, compared to down below and to the rear of the fuselage where it reminded me of that football game I had as a child where you turned it on and the players vibrated around the board.  I felt like if I had plastic clips on my boots I could have vibrated to any spot in the fuselage I wanted to go without moving my legs…and the noise was deafening.  The 747 flies with its nose 5 degrees up in the air to stay level, and when you bank, it feels like the shuttle is trying to say “hey, let’s roll completely over on our back”..not a good thing I kept telling myself.  SO I limited my bank angle to 15 degrees and even though a 180 degree course change took a full zip code to complete, it was the safe way to turn this monster.

Airliners and even a flight of two F-16s deviated from their flight plans to catch a glimpse of us along the way.  We dodged what was in reality very few clouds and storms, despite what everyone thought, and arrived in Florida with 51,000 pounds of fuel too much to land with.  We can’t land heavier than 600,000 pounds total weight and so we had to do something with that fuel.  I had an idea…let’s fly low and slow and show this beast off to all the taxpayers in Florida lucky enough to be outside on that Tuesday afternoon.  So at Ormond Beach we let down to 1,000 feet above the ground/water and flew just east of the beach out over the water  Then, once we reached the NASA airspace of the Kennedy Space Center, we cut over to the Banana/Indian Rivers and flew down the middle of them to show the people of Titusville, Port St.Johns and Melbourne just what a 747 with a shuttle on it looked like.  We stayed at 1,000 feet and since we were dragging our flaps at “Flaps 5”, our speed was down to around 190 to 210 knots.  We could see traffic stopping in the middle of roads to take a look.  We heard later that a Little League Baseball game stop to look and everyone cheered as we became their 7th inning stretch.  Oh say can you see…

After reaching Vero Beach , we turned north to follow the coast line back up to the Shuttle Landing Facility (SLF).  There was not one person laying on the beach…they were all standing and waving!   “What a sight” I thought…and figured they were thinking the same thing.  All this time I was bugging the engineers, all three of them, to re-compute our fuel and tell me when it was time to land.   They kept saying “Not yet Triple, keep showing this thing off” which was not a bad thing to be doing.  However, all this time the thought that the landing, the muscling of this 600,000 pound beast, was getting closer and closer to my reality.  I was pumped up!  We got back to the SLF and were still 10,000 pounds too heavy to land so I said I was going to do a low approach over the SLF going the opposite direction of landing traffic that day.   So at 300 feet, we flew down the runway, rocking our wings like a whale rolling on its side to say “hello” to the people looking on!  One turn out of traffic and back to the runway to land…still 3,000 pounds over gross weight limit.  But the engineers agreed that if the landing were smooth, there would be no problem.  “Oh thanks guys, a little extra pressure is just what I needed!”  So we landed at 603,000 pounds and very smoothly if I have to say so myself.  The landing was so totally controlled and on speed, that it was fun.  There were a few surprises that I dealt with, like the 747 falls like a rock with the orbiter on it if you pull the throttles off at the “normal” point in a landing and secondly, if you thought you could hold the nose off the ground after the mains touch down, think again…IT IS COMING DOWN!!!  So I “flew it down” to the ground and saved what I have seen in videos of a nose slap after landing.  Bob’s video supports this!  :8-)

Then I turned on my phone after coming to a full stop only to find 50 bazillion emails and phone messages from all of you who were so super to be watching and cheering us on!  What a treat, I can’t thank y’all enough.  For those who watched, you wondered why we sat there so long. Well, the shuttle had very hazardous chemicals on board and we had to be “sniffed” to determine if any had leaked or were leaking.  They checked for Monomethylhydrazine (N2H4 for Charlie Hudson) and nitrogen tetroxide (N2O4).  Even though we were “clean”, it took way too long for them to tow us in to the mate-demate area.  Sorry for those who stuck it out and even waited until we exited the jet.

I am sure I will wake up in the middle of the night here soon, screaming and standing straight up dripping wet with sweat from the realization of what had happened.  It was a thrill of a lifetime.  Again I want to thank everyone for your interest and support.  It felt good to bring Atlantis home in one piece after she had worked so hard getting to the Hubble Space Telescope and back.